Edinburgh - Eight individuals found beneath a car park in Edinburgh’s Old Town could be the family of a medieval knight buried under an elaborately-decorated sandstone slab, say archaeologists whose skeleton count at a 13th century Blackfriar’s monastery has reached double figures.  One adult female and one child skeleton have been discovered close to the remains of a suspected knight, whose grave carried the carving of the Calvary Cross and an ornate sword – telltale signs of a member of the nobility. Four infants and a skull were also unearthed. “This site just keeps getting more and more interesting,” said archaeologist Ross Murray, who found the grave and is an ex-student of the University of Edinburgh’s former archaeology building, which was based yards from the site until 2010. “It is turning out to be a real treasure trove of archaeology. We just can’t seem to stop finding skeletons and bones. “These new finds look likely to be the possible relations of the suspected medieval knight. “The skull of the skeleton found immediately beneath the location of the knight looks like that of a female. “The remains found on the other side of the ornate slab belong to an infant from the same period.” All of the remains were laid to rest within the confines of an ancient wall, which archaeologists believe could be the remains of a family crypt. The grounds, which will become the new Edinburgh Centre for Carbon Innovation building, were a base for schools during the 16th and 17th centuries.
http://www.culture24.org.uk/history-and-heritage/archaeology/art519829-remains-of-suspected-family-of-medieval-knight-found-at-former-surgical-hospital-in-edinburgh 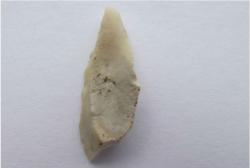 Ashby - Archeologists have found proof there were humans in the area now known as Ashby as far back as 10,000BC. A dig in the grounds of the town’s St Helen’s Church in the summer of 2013 uncovered a wealth of finds which are still being analysed. The latest item to be identified is a microlith, a tiny, sharp fragment of flint made to be used as a blade. The instrument is typical of the Mesolithic period (10,000BC to 4,000BC), a time when Stone Age man was beginning to settle down, moving from being hunter-gatherers to becoming the first agriculturalists. “We knew there were people in Anglo-Saxon times, in the sixth and seventh centuries, but we had no idea there were people possibly 12,000 years earlier.” Anne said it had taken a long time to identify the microlith because the finds had to be sent off to a specialist.

INDE - Mandan Dham - The much-awaited proposal to declare the entire Mandan Dham complex a state protected site got the green signal when the state government on Tuesday formally declared the complex, including the famous Ugratara temple, as the state protected site in Bihar.The proposal was pending for the last three decades. The Ugratara temple, situated at Mahishi village in Saharsa, is believed to be a 'Shaktipeeth'.Mahishi is also the birthplace of legendary 8th century scholar and philosopher Pt Mandan Mishra.Last year, a three-member technical team of Bihar state archaeology directorate had visited Mahishi to survey the temple and the Mandan Dham mound. The team had also visited Nakuch Shiv temple and mound, 3km south of Mandan Dham.Conservation officer of directorate of archaeology Satyendra Kumar Jha, who led the team of senior technical assistant Satyadev Ray and senior photographer Sanjeev Ranjan, examined the statues and
artefacts scattered near Ugratara temple.They also found lots of potteries of Gupta period near Mandan Dham mound. Jha in his report had mentioned about the huge archaeological potential of this site.The Patna circle of Archaeological Survey of India (ASI) had also sent a team under Neeraj Kumar Sinha, to Mandan Dham to assess the historic value of the ancient wall discovered inDecember last year when the workers were digging the earth for the construction of a boundary wall of a proposed library.The team had also found an ancient wall dating back to 7th or 8th century besides a well-like structure and some ancient potteries on the spot.

Waterloo - The high definition images taken from the air using LIDAR, a technology used to make computer terrain models and high definition maps shows just how much the landscape has changed since the battle was fought two hundred years ago. The images appear to confirm the existence and precise location of features, long invisible on the ground (and the subject of speculation by historians) which influenced the outcome of key areas of the battle around the Chateau and farm of Hougoumont. Château d’Hougoumont is a large farmhouse situated at the bottom of an escarpment near Waterloo, Belgium. The escarpment is where British and other allied forces faced Napoleon’s Army at the Battle of Waterloo on June 18, 1815.

Leyde - The Hortus Botanicus at Leiden University, is the oldest botanical garden in the Netherlands, celebrating its 425th anniversary this year. It was the ambition of a group of scientists to create a garden where students could study the medicinal properties of plants, and they presented their idea to Leiden’s municipal government in 1587, twelve years after the university was founded. The scientists had already set their sights on one particular location: an unused strip of land immediately behind the Academy Building. The municipal authorities approved the development of a ‘hortus medicus’ in 1590. The herb garden was constructed by Dirck Outgaertsz Cluyt, the former apothecary at the court of William of Orange. The Flemish botanist and professor Carolus Clusius was appointed as its first director; his ambitions reached far beyond a mere garden of medicinal plants. Instead, he dreamed of a Hortus that is home to every known plant in existence. As part of that ambition, he brought previously obscure plants to Leiden, such as the tomato, potato and tobacco plants, as well as tulips. Through his efforts, awareness of these plants grew enormously throughout Northern Europe. Clusius also introduced various plants that were brought back by the Dutch East India Company.