Thua Thien-Hue - The incident in the central Thua Thien-Hue Province came to light on June 21, and has agitated locals and historians, which in turn has prompted the provincial People’s Committee to demand a report on the episode. The site was being bulldozed for the construction of a parking lot. The Nguyen Family committee, an organisation representing descendants of the Nguyen Dynasty (1802-1945), and the investor of the parking lot, whose bulldozer razed the tomb, also want the exact location of the tomb so they can retrieve the bones and belongings of the king’s wife. At the same time, the Hue Monuments Conservation Centre, the local body that manages all monuments related to the dynasty in Hue, said the text on the stone stele attached to the razed tomb is the same as that found on a worshipping plate in a temple designated for the king’s wives inside Tu Duc Mausoleum. This is further validation that the razed structure was a royal tomb built for a king’s wife and that she was one of the wives of Tu Duc (ruling from 1847 to1883), the dynasty’s fourth king. King Tu Duc had 104 wives. The woman buried in the bulldozed tomb is believed to be among wives of the 9th rank of the emperor. 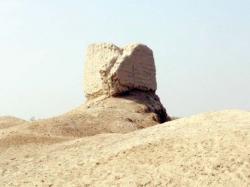 Mound Dillu Roy - Situated on Jampur-Dajal Road, around five kilometres from Jampur, Mound Dillu Roy, commonly known as Dillu Roy Theatre, is one of the oldest settlements known to mankind. It is an ancient site from Buddhist period which is located in Dera Ghazi Khan District. Study and ancient objects found from the old city site reveal that it was occupied by the Buddhists in the Scytho-Parthian period dating back to the 1st century BC. Most historians believe the site remained buried underneath thousands of years of dust, sand and stone until it was rediscovered in 1858 by archaeologists. They say the ancient city is named after a Brahman prince called Dillu Roy. Subsequent studies of the site and objects exhibit that Mound Dillu Roy was a sophisticated settlement of traders, fishermen and farmers and had complex religious cults. The ancient city resembles that of Moenjo Daro and Harappa in Sindh. According to historians, Dillu Roy city was built on two storeys: The upper part is situated above the land which is covered in sand while the lower part is buried underground. When the archaeologists dug the site, the plan of houses and streets was visible. Some of the walls with traces of mud plaster stand as high as 12 feet and at certain places, complete plan of rooms, streets and shops is traceable. Besides, a wheat warehouse was also unearthed during excavation. Some people believe that the city consisted of four bastions which were used to guard the city and its people. However, with the passage of time, the bastions were demolished and now only their traces were left. The surface finds from Dillu Roy included a wide range of plain, painted stamped and incised pottery with applique decoration. A few pottery moulds with flower and leaf motifs have also been found. In addition, knives and sharp edged tools were also recovered from the spot during excavation.

Sürmecik  - Findings from 200,000 years ago that have been discovered during Sürmecik excavations, which were initiated after fossils found in the Aegean province of Uşak’s Banaz district, are expected to shed light on the lifestyle of Neanderthal people who lived in the Paleolithic age. Harun Taşkıran, the head of the Archaeology Department at Ankara University, said they found many artifacts from the Paleolithic age in the Sürmecik excavation field. Taşkıran said the area has become a very special field for the Aegean region and also Turkey that shed light on the Paleolithic age. “We have been working for two years in a field that was discovered by chance. We have so far collected some 80,000 pieces and among them 30,000 are suitable for display,” he added. Taşkıran said that among the findings unearthed this season are a hand axe and arrow head that Neanderthals used to hunt.  Taşkıran said this year’s excavations ended and they would continue works next year, adding that all findings will be examined in detail. “Nearly 200,000 years ago, a group of Neanderthal people lived along the hot water resource in the region. Turkey’s best artifacts from the mid-Paleolithic age are known to be in Antalya’s Karain Inn but some artifacts in Sürmecik are unique. This place gives all stages of the Mid-Paleolithic age. We will continue working to date these artifacts. But we can say that we have artifacts from at least 200,000 years ago,” he added.