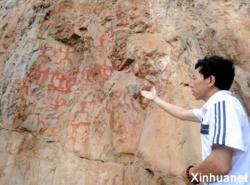 Huashan - China has applied for World Heritage status for the ancient rock carvings of the Huashan Mountain in Guangxi Zhuang autonomous region in 2016. The rock paintings of Huashan Mountain are located on the west bank of the Mingjiang River in the Yaoda town, Ningming county, Guangxi Zhuang autonomous region. It is the biggest, most content-rich and best-preserved ancient rock carvings in China among all the discovered cultural relics to date. With a history of around 1800-2500 years, the sites were left from sacred activities of the ancient Luoyue people of the Zhuang ethnic groups in the drainage area of the Zuojiang River during the Warring States period (475-221BC) and Eastern Han Dynasty (25-220AD). The whole painting stretches more than 200 meters in length and around 40 meters in height, with more than 1800 images in it, including people, horses, dogs, knives, swords and drums. Though a variety of archaeological theories have been made to explain the origin of the ancient artistic work, the exact reason for its creation still remains a mystery. 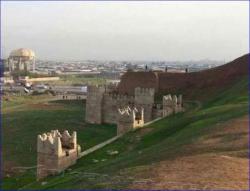 Ninive - Large parts of the ancient Nineveh wall, a monument of the Assyrian civilisation which had survived for about 3,000 years, were detonated by ISIS as was announced by a Kurdish official on Tuesday. Nineveh was once the largest city in the world, with a population of as many as 150,000 people in 700BC. Although it now lies ruins, it is still surrounded by a mostly intact 7.5-mile brick rampart. About a month ago, people living in the Bab Nergal area of Mosul, close to the historic site, said militants told them they would destroy the walls if the Iraqi army attacked, a report claims. On Tuesday evening, the media official of the Kurdistan Democratic Party (KDP) in Mosul, Saed Mimousine, said in an interview for IraqiNews.com, “ISIS militants blew up today large parts and expanses of the archaeological wall of Nineveh in al-Tahrir neighborhood”. Mimousine stressed that, “Bombing the archaeological monuments by ISIS is a flagrant violation of the right of human culture, civilization and heritage,” calling the international community to “take a stand to curb the destruction of historic monuments.”

Minya - Average Egyptians have been destroying cultural artifacts – to the point that a pair of mummies last week were found in a sewer and were so damaged that they could not be properly restored. The two mummies, from the Greco-Roman period, were found wrapped in layers of linen and covered with sewage. Within the layers only a few remnants of the bodies remained, the Egyptian paper al-Masry al-Youm reported. The Egyptian Antiquities Ministry said that the mummies were found in a small city near Minya, in northeastern Egypt, 150 miles (250 km) south of Cairo on the western bank of the Nile. This isn't the first time that new mummies have been found in different places in Egypt. They're found quite often.The sarcophaguses in which the police found the mummies were floating in sewer water and were crumbling, the ministry reported. Nonetheless, the agency said that the sarcophagus covers were ornamented with women's faces in different colors, and the contours of the women's faces are clearly visible.