Charleston -  A Civil War artillery shell was found on the College of Charleston campus Wednesday morning in downtown Charleston.“It is quite common to find civil war artifacts on the peninsula, not always as spectacular as an unexploded shell, though they are found every once in a while,” explains Archaeology Professor Barbara Borg. “From time to time battalions of soldiers came through and camped in large numbers, so it is common to find horse hardware, ceramics, cookware, buttons and buckles from clothing, pewter silverware and, where preservation is really good, items made out of wood, like drumsticks and the wooden parts of brushes.” 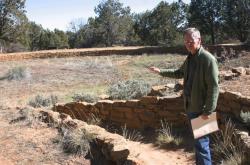 Mesa Verde -Was it a reservoir, a ceremonial plaza, a ball court? Mesa Verde National Park in Colorado is taking a new look at a ruin known as Mummy Lake in hopes of determining how ancient Puebloans used it, The Cortez Journal reported Monday. Archaeologists disagree about the large circular depression lined by sandstone walls. Since 1917, the prevailing view has been that it was a reservoir built as early as 900 A.D. Sediment buildup behind what could have been an intake canal fit the reservoir profile. And a set of stairs into the structure suggested it was used by Ancestral Puebloans to collect stored water. Faint impressions of irrigation canals also pointed to agricultural use. But archaeologist Larry Benson refutes the reservoir theory in a paper recently published in the Journal of Archaeological Science. Benson hypothesizes that the function of Mummy Lake was for community ceremonies. He suspects the area was abandoned due to drought in the early 1200s. Benson points to previous studies that ancient Southwest cultures periodically relocated ceremonial structures then linked them to newly constructed facilities with broad avenues. "The avenue has previously been interpreted as an irrigation ditch fed by water impounded at Mummy Lake," Benson wrote. "However, it conforms in every respect to alignments described as Chacoan roads." A sturdy staircase, elaborate for its time, descends into Mummy Lake and could indicate it was a ceremonial plaza. "The way the stairs were perfectly built suggests it was not just utilitarian," Travis said. For several weeks this summer, Benson's crew was at the site studying landscape hydrology to disprove the reservoir theory. Benson doubts the topography would have allowed for the reservoir to fill because it is on an elevated ridge. "Within a matter of seconds during a storm, sediment would have filled the hypothetical ditch then forced the water over the cliff edge," Benson wrote. Benson redefines the irrigation canals as wide avenues that linked the Mummy Lake ritual plaza with neighboring Far View and Pipe Shrine Houses, and also to the Cliff Palace and Sun Temple complexes farther away. Another possible explanation is that Mummy Lake could have been used as an ancient ball court. Such courts have never been documented at Mesa Verde, and the closest one is in the ancient Hohokam villages near Phoenix. 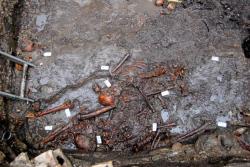 Aalborg - Archaeologists in Aalborg have found the remains of about 15 killed warriors who they believe were part of a battle that took place during Grevens Fejde (the Count's War), a Danish civil war  from 1534-1536. The find – which consisted of between 10 and 15 adult male skeletons intertwined together – took place a few days ago in the centre of Aalborg on Algade where a new sewer system is being installed as part of new youth housing. "Because these were all men, we have a hypothesis that the graves are connected to a wartime action,” Stig Bergmann Møller, the museum inspector at the Historical Museum of Northern Jutland, told Nordjyske.dk. ”Had it been an epidemic, there would also be skeletons of women and children.”The archaeologists – who have been monitoring the sewer system instalment since November – believe that the men were killed in connection with General Johan Rantzau storming Aalborg in December 1534. Aside from the skeletons, the archaeologists also found the remains of a Middle Ages church St Peders Kirke and its graveyard, where about 30 graves have been excavated. Before the skeletons can be confirmed as soldiers, further anthropological tests are required.