ISRAEL - Shiloh - According to the Hebrew Bible, the Israelites set up the Tabernacle—a portable sanctuary they had constructed at the foot of Mount Sinai—in the city of Shiloh, about 20 miles north of Jerusalem, not long after entering the Promised Land. Shiloh remained the main center of Jewish worship for most of the period preceding King David, who relocated the Tabernacle to Jerusalem, where it would later be replaced by the Temple. In the 20th century, archaeologists identified the ancient city’s remains, which dated back to the second millennium BCE. A century after the first archaeological excavations at the site of ancient Shiloh, . . . a new dig has unearthed a number of rare finds, including five intact jugs that date back some 2,000 years to the time of the Talmud. The jugs were in a row, underneath a floor, most likely to keep their contents cool. Their location is also likely what kept the vessels intact.  The dig was attempting to determine the location of the ancient wall and the entrance to the city. Workers dug a trench on the edge of the southern tel (mound) and exposed layers from all the periods of history when the site was active, from the Bronze Age to the Ottoman Empire. The Canaanite wall itself was first uncovered by a group of Danish archaeologists 100 years ago.The excavation also turned up a number of coins, a key apparently used to unlock a chest, and even wooden dice identical in shape to dice used today.

Red Bank - Archaeologists working at Red Bank Battlefield, a site along the Delaware River south of Philadelphia, have uncovered the remains of 13 Hessian mercenaries who were killed during a bloody Revolutionary War battle. The remains were found in a former trench that was part of the defenses of Fort Mercer, where 500 American patriots were stationed to prevent British ships from supplying troops in the city. On Oct. 22, 1777, a contingent of 2,000 Hessian soldiers fighting for the British set out to overwhelm the small force, but the day ended in a resounding defeat, with 377 Hessians killed but only 14 American casualties. Genetic studies are being conducted on the remains, which include isolated body parts.  Some of the bones display wounds from musket balls and from grapeshot that would have been fired from cannons inside the fort or from ships in the river. Mr. Catts said he believed that the Hessian remains belonged to members of the Regiment von Mirbach, which is known to have attacked the center of Fort Mercer’s defenses. He was excited by an additional discovery: a British gold coin, worth about one month’s salary for the average soldier, that may have belonged to Lieutenant Colonel Ernst Rudolf von Schieck, who commanded the Hessian regiment and died in the fighting.

Zeyve Höyük - This year’s excavations at Porsuk-Zeyve Höyük (Zeyve Mound) near the Porsuk village of the Ulukışla district of Niğde, located in the center of Turkey, uncovered the plaster walls of the Persian period. During the excavations carried out in the previous years, Hittite hieroglyphs inscribed on sandstone dating to the 8th century BC, fortification and watchtowers used as garrison in the Hittite period, and castle walls and plaster remains from the Iron Age were unearthed. During this year’s excavations, walls made of gypsum stone belonging to the Persian period were found. Stating that they were excavating the highest part of the mound, Barat told that they also cleaned the adobe fortification walls of the Iron Age in the 8th and 7th centuries BC. Sometime after the Iron Age walls were built, the wall facade was covered with gypsum stones and stone filling. These stone structures were used in the Persian and Achaemenid periods in the 6th and 4th centuries BC. It is very important because there are few artifacts from the Persian period in the Cappadocia region. This is an extremely strategic region in the Hittite period as well as in the later periods. Presumably, the area was occupied by a local ruler at that time. From here, the main road from Sinop to Tarsus and passing through the Cilician gates is controlled. During the excavations, they learned that these walls were surrounded by the Romans and suffered a fire. The walls were later repaired and occupied by the Romans. For this reason, it is thought that southern Cappadocia came under Roman domination not peacefully, but as a result of a fierce war.

Shrewsbury  - Archaeologists say they cannot confirm whether features uncovered at Shrewsbury Castle are the remains of a Norman wooden tower predating the site's conversion to stone. An 11-day dig began on 17 July, with an earth mound - known as a motte - probed for evidence of the structure. Findings could not definitively be said to be the tower, the team concluded. But they said evidence nevertheless pointed to remains of wooden buildings on the motte. Among members was Dr Nigel Baker who explained: "Although remains of the 'great tower' - the timber tower that collapsed in the third quarter of the 13th century - were not positively identified, not all features were fully within our 2m trenches."Some of the post-holes were packed with a distinctive crumbly green sandstone, obtained nearby from the River Severn. "This has recently been identified by research since 2019 as the stone most likely used in the first phase of building the curtain walls and converting the Norman earth-and-timber fortress into a stone castle." Previous excavations at the castle found that work carried out by the civil engineer Thomas Telford in the 1780s had damaged a lot of the site, Dr Baker said.

TURQUIE - Bathonea - The city of Bathonea dates back to the 2nd century BC and is located in Istanbul’s Avcilar District. Archaeologists have discovered many findings among the ruins of the ancient city, including seven hundred small glass and ceramic bottles containing medicines that are believed to have been used to treat depression and heart disease. Aarchaeologists found much more than just the seven hundred bottles, some of which contained antidepressants, at the ancient Greek site, such as an entire laboratory, complete with mortars, pestles, and big cookers alongside many spatulas and other medical tools. The laboratory itself is believed to be from around the 7th century AD or even earlier, and evidence of a massive fire at the site dating between 620 AD and 640 AD has led archeologists to believe that it was most likely destroyed during an attack by the Avar Empire in 626 AD.The medicine found in the bottles was made from local plants which were also uncovered in the excavation. The two medicines found were methadone, which is an antidepressant and phenanthrene, which is used for heart disease.

MOLDAVIE - Glinoe - In the vicinity of the village of Glinoe, Slobodzeya region, Pridnestrovian archaeologists discovered the burial place of a noble Mongol warrior. His belonging to the highest military aristocracy is evidenced by a set of weapons and a horse burial arranged near the tomb. Among the artifacts of the warrior’s tomb: iron arrowheads of various shapes, a dagger and a long saber, separate parts of a birch bark quiver have been preserved. The primary analysis of these objects and the elements of the burial rite (the shape of the pit, the orientation of the skeleton) made it possible to determine the time attribution of the burial: this is the end of the 13th century – the era of domination of the Golden Horde in the steppes of the Northern Black Sea region. Judging by the size of the skeleton, the man during his lifetime was not tall – barely 1.6 meters. Interestingly, the saber found with him is 1.3 meters long. The hilt is located at the shoulder bones of the buried, and the edge of the blade reaches the lower leg. The warrior wielded a saber almost as tall as his. This speaks of the strength and dexterity of a person, which is confirmed by his broad bones. The shape of the skull and prominent cheekbones, in turn, speak of its Mongoloid origin. The quiver set indicates that this man was a skilled archer. He knew how to handle arrows with different tips, differing in shape and weight. Among them are massive three-lobed and diamond-shaped. When skillfully used at short range, they pierced armor and chain mail, making them very effective against heavily armed infantry or cavalry.

Mány - Archaeologists from the Szent István Király Museum have excavated Bronze Age treasures in a cemetery near the town of Mány. The team found 8 burials, with one notable burial containing the remains of a young woman no older than 20 years of age. She was buried with 38 ornate gold and bronze decorative objects, such as gold rings, torcs, spiral armlets, a gold hair ring, in addition to several small ceramic pots. The researchers believe that the woman was buried with rings on each of her fingers, indicating that she was a wealthy individual who held a high social status in her community. The items also represents an advanced knowledge of metal working, revealing new insights into the clothing and accessories worn by the Bronze Age inhabitants of the region thousands of years ago. The team also found traces of a Bronze Age settlement and settlements from the Árpád period that date from the 9th and 10th century AD. 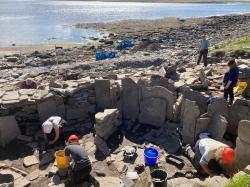 Knowe of Swandro - Staff and students are battling against erosion to uncover the secrets of an Iron Age settlement and its surrounding area on Rousay. The excavation is part of a number of archaeological projects forming Scotland Digs 2022. The site, at the Knowe of Swandro, was once a large settlement occupied from around 1000BC to AD1200 and consists of Iron Age roundhouses, Pictish buildings, a Viking settlement and a Norse long hall, and is considered an area of extreme importance due to the insight the dig can provide on the use of existing sites by Scandinavian settlers. Dr Steve Dockrill, an honorary researcher, has warned that the project is a race against tide and time. He said: “A substantial Iron Age roundhouse, which forms the focus of a village-like settlement is being eroded by the sea. The large roundhouse had been lived in by generations for a millennium or more, and shows signs of a number of building events modifying the structure.” The excavation has recently uncovered jewellery, tools made from bone, pottery and a late Roman coin as well as a rare Iron Age glass toggle bead.