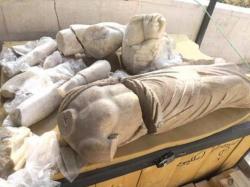 Jerash - An international archaeological team lead by French experts has discovered rare and "priceless" Roman sculptures in the north city of Jerash following three years mission that promises to unearth more troves, according to officials from Jordan archaeological department. The findings include a sculpture of the Greek goddess of love and beauty 'Aphrodite,' an unprecedented finding in the kingdom and one of the few worldwide. "This is the first time in Jordan history we discover a statue for Aphrodite (Venus). In total, the findings include at least 14 large sculptures, some of which are fully intact, while others have been decapitated. Archaeologists are currently combing through the site in order to learn more about the findings, some of which are seen for the first time."This is a result of three years of continues work with international and local experts working in al Hamamat site, a well known Roman location," said Ghuneimat. One of the most intriguing discoveries include a sculpture of Zeus, a popular figure in Jerash that will join other sculptures being displayed in Jerash temple of Zeus, added Ghuneimat. The other findings, some of which are being renovated, will be displayed in an exhibition in Jerash for visitors of the ancient Roman city.,The archaeological mission is expected to continue digging until later this year, hoping to unearth at least two more sculptures that would complete a set of sculpture for the Nine Muses - the daughters of Zeus. Archaeologists have discovered seven of the sculptures in Jerash and hope to unearth the remaining two to complete the set. Ghuneimat stressed that the findings represent a major development in the status of Jerash as an attraction for scalars and experts from around the world.,It would also give an added incentive for tourists to see some of the most rare sculptures that date back to the second century BC. (ANSAmed).

Fujairah - According to the Fujairah Tourism and Antiquities Authority, FTAA, more than 31 petroglyph sites have been found in Fujairah, including sites in Wadi Saham, Hassat al-Risoom, Wadi ah-Shanah, and Wadi al-Hayl. These petroglyphs provide valuable insights into past occupants of the country, dating as far back at the Bronze Age, over 3,000 years ago, as well as the local Iron Age, which lasted from around 1250 BC to 300 BC, the late pre-Islamic period and during the Islamic period. While petroglyphs are difficult to date without scientific analysis of the rocks on which they are found, some motifs have direct parallels with excavated artefacts from the Iron Age. Motifs (designs) portrayed in the rock art include drawings of horses and riders, ‘wusum’ (tribal signs in the form of geometric symbols), and other zoomorphic (related to animals) and anthropomorphic (related to humans) symbolism. Among the motifs discovered, according to FTAA, is a collective dance scene that provides an insight into aspects of historical development, including agricultural practices.

Nemea - An intact tomb from the early Mycenaean era (1650-1400 BC) has been unearthed by archaeologists in the region of Nemea, southern Greece. According to the Culture Ministry, the tomb is among the largest ever found in the region and is set apart by the short yet wide path leading to its entrance along with other features that place it in the early phase of the Mycenaean civilization. It was found in a Mycenaean cemetery in Aidonia. The Mycenaean civilization, with its palatial states, urban organization, sophisticated art and writing system, flourished in Greece in the 17th-12th centuries BC.

Vidöstern lake  -  An eight-year-old Swedish-American girl came across an exciting find swimming at her local lake, when she pulled an ancient sword from its depths. It was initially reported that the sword was at least 1,000 years old, but the museum later contacted The Local to clarify that they believe it may be even older, estimated to date back to the 5th or 6th century AD, pre-Viking Age. The find has prompted huge interest from archaeologists and historians."It's about 85 centimentres long, and there is also preserved wood and metal around it," explained Mikael Nordström from the museum. "We are very keen to see the conservation staff do their work and see more of the details of the sword."

Cambridge  - A team of 250 archaeologists have been on site as part of Highways England's £1.5bn scheme to improve the stretch between Cambridge and Huntingdon. More than four tonnes of pottery fragments have been unearthed since work began two years ago. Experts said some of the pottery was of the "highest quality". Teams led by the Museum of London Archaeology have dug more than 40 separate excavation areas covering an area of 350 hectares (3.5 sq km). The entire area was the site of a medieval village and a Roman trade distribution centre, archaeologists found. Among the pieces recovered are a Samianware Roman bowl, depicting a male figure fighting a lion, which would have been imported from France - giving an insight into the wealth, status and travels of the people who lived here.

ALBANIE - Archaeologists in Korca in the southeast of Albania have unearthed one of the largest ancient cemeteries in Albania. In Turan, which sits in an agricultural valley surrounded by the Morava Mountains, excavations reveal 1,000 or more layered burials.  Reports from the dig suggest that several of ceremonial burials are richly appointed. The excavation by a team of archaeologists has uncovered burials and artifacts from Neolithic times, the  Iron Age, late Roman times, and the Middle Ages. Under the bottom layer are traces of a rare Neolithic settlement demarcated by holes in the ground that supported the now-rotted wooden skeletons of small huts. The scientists discovered 20 Neolithic sites in Albania, dating roughly from the 7th to the 3rd millennia B.C. Some of these are the earliest farming settlements in Europe. This most recent discovery came about when workers digging a pipeline stumbled across the cemeteries. Interestingly, no traces of the settlements these cemeteries served have yet been located, but Pojani said it’s easy to see why people through the ages chose to live there. The recent finds include grave goods included rings, bracelets, earrings, amber and glass beads, gold coins, lots of pottery — including local copies of 11th or 10th century B.C. wine jugs popular in neighboring Greece — medieval wooden caskets and clothes worked with silver thread, as well as spears, daggers, knives, and swords. Turan, which lies about 180 kilometers (110 miles) southeast of the capital Tirana, is the most important 30 sites discovered since the laying of the Trans Adriatic Pipeline, or TAP, that will bring natural gas from Azerbaijan through Turkey, Greece and Albania, and across the Adriatic Sea to southern Italy.  The Turan site has been in use for almost 2,000 years, and the cemeteries date back to 700 B.C. The archaeologists hope that the burials will help them answer questions about who these people were and their relationship to other settlements.