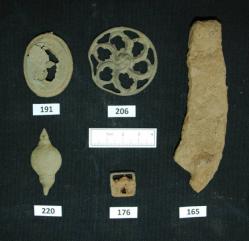 Killiecrankie  - Relics related to the 17th century Battle of Killiecrankie have been found following an extensive archaeological survey of the Perthshire site, which included the use of metal detectors. Experts believe the finds will help improve knowledge of one of the key episodes in Scotland’s military history. Musket munitions, a copper alloy pendants, part of the support for a sword belt, two buckles, horse shoes, buttons and pendants are among the items which were found during a lengthy treasure hunt which began last summer. They have been recovered from part of the battlefield site where the new road will be constructed, near the Pass of Killiecrankie, north of Pitlochry. The Battle of Killiecrankie - the initial conflict in the first Jacobite Rising - was fought on 27 July 1689 between Jacobites loyal to King James VII and II and troops supporting the Protestant King William.

Pembroke Castle - The geophysical survey will further advance the understanding of one of Wales’s and the UK’s most iconic castles and birth place of Henry VII. Best known for its massive round keep built by William Marshal, the greatest knight of his age, little else is known about what exactly was in the castle’s interior. Even the location of the possible chamber block where Henry VII was born is unknown because of post-medieval destruction. Tantalising glimpses of what lies beneath the surface were revealed in aerial photographs in 2013, with parch marks revealing the outline of a number of possible buildings. Dyfed Archaeology Trust with the guidance of well-known castle expert Neil Ludlow will use the latest geophysical techniques including ground penetrating radar to try and reveal some of the secrets. Not only could the research reveal the possible chamber block where Henry VII was born, but also what was likely to be extensive high status buildings befitting the great medieval baron and protector of Henry III in his minority, William Marshal, who built extensively there in the early C13.

Beçin - The Beçin treasure trove, which was discovered in 2000 during excavations in Beçin, located in the Milas district of the western Muğla province, was first weighed on grocery scales while each coin was cleaned with q-tips.  The head of the excavations then, Professor Rahmi Hüseyin, who unearthed the trove of 48,848 Ottoman and 848 European coins, said they were very excited when they had found the trove in a structure called the “taxman house.”  Ünal said they had seen the trove 1.5 meters deep in the granary of the two-floor house, adding, “As we were digging, we saw the greatness of the trove.”  He said due to circumstances at the time, they had to weigh the trove with grocery scales. The trove weighed 33 kilograms, and the treasure was subsequently cleaned by the Ephesus excavation team. Ünal said the team had also discovered that the building had survived a big fire. As a result, the team has been unable to discover what exactly the building’s purpose was . The head of Beçin Castle excavations and Pamukkale University History of Arts Department, Professor Kadir Pektaş, said special arrangements at the Beçin Castle would be completed by the end of this year.  Since the beginning of excavations in 1974, many coins and ceramic pieces have been found in the area, and according to Pektaş, the trove was an important find for the scientific world.  Speaking of Beçin’s importance as a Turkish-Islamic era settlement, Pektaş said, “It is one of the rare examples established in the 14th and 15th centuries, which developed and defended itself. Excavations give very important clues about the Beçin Castle and Anatolian Turkish art. On the other hand, it is also a significant place in terms of early Anatolian history since it dates back to the Chalcolithic, Byzantine and Hellenistic eras.  Beçin has been known as Pezona, Bercin and Peçin throughout its thousand-year history. During the time of Anatolian beyliks, it served as capital of the Menteşe Beylik, a regional naval power of the time.
http://www.hurriyetdailynews.com/ottoman-trove-cleaned-with-q-tips-.aspx?pageID=238&nid=95949

Plymouth- Dozens of bones have been uncovered at a Plymouth church after diggers moved in to start renovation work. An archaeologist has been called to Stoke Damerel Church after crypts were discovered and bones found. John Steere, who is the churchwarden, believes the bones could date back as far as the 15th century. He said: "We were pretty certain we would find something, we just didn't know when. "So far, two or three collections of human remains have been found. However, due to the carelessness of our Victorian predecessors, the bones are scattered across the church. "Over half a dozen void areas have been found. An archaeologist is now on site examining the bones, to log all the details, and to ensure human remains are handled respectfully."