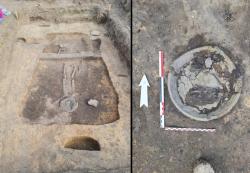 Ostrowite - Archaeologists have discovered a burial chamber in Ostrowite, in the Pomeranian Voivodeship of Poland that contains several high-status grave goods. The study was conducted by the Institute of Archaeology of the University of Lodz, where researchers found several burials and fragments of bronze bowls during previous archaeological studies of the vicinity. In the latest excavation, the team found the burial of a man from the 11th to 12th century AD, buried in a wooden structure that resembles a large chest or a small house. The type of burial is consistent with chambered burials normally associated with high status individuals during the early medieval period, with the suggestion that he may have been a Christian based on the east-west axis of the body. Within the burial, archaeologists uncovered two amber rings, a large bronze bowl and an iron knife in a leather sheath with bronze fittings. The amber rings were symmetrically arranged in relation to the body axis, whilst between the legs of the deceased was a bronze bowl containing pieces of wood (most likely the remains of the ceiling from the wooden structure). On the surface of the bowl and knife sheath, archaeologists identified fragments of fabrics or their imprints, whilst beneath the bowl was small fragments of leather that are most likely the remains the deceased’s footwear. Ostrowite was an important but local centre of power that functioned from the 11th to the 14th centuries.

Pyrgion - A Byzantine fortress will soon be unearthed at the ancient city of Pyrgion, the modern-day city of Birgi in what is now western Turkey. Excavations have already begun at the site to unearth vast Byzantine-era fortification system thought to be nearly 900 years old.  The walls of the Byzantine fortress will be uncovered in the excavations. There used to be a tremendous fortress here that covered an expanse of 6 hectares (14.8 acres). The fortress, which did not have any architectural embellishments, was surrounded by rough stone walls. The Greek name of the town, Pyrgion, means “fortress.” 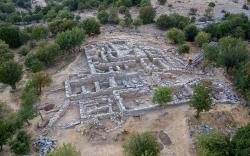 Zominthos - With little more fieldwork to do, excavations at the famous site on Crete are now drawing to a close after nearly 40 years. Zominthos has been described as a unique Minoan palace center, located at an altitude of 1200 meters near Ideon Andron Cave, the mythical birthplace of Zeus, nestled into the side of Mount Ida (Psiloritis). The area was already home to a large building complex in the Protopalatial (Old Palace Period), from c. 1900 BC, and had access to plentiful supplies of freshwater.In the subsequent Neopalatial (New Palace Period), from c. 1700 BC, a monumental building of 1600 square meters was built over the northwest wing of the old palace, one of the largest Minoan buildings ever found. Some of the remaining walls of this well-preserved multi-story building are three meters in height. It has been speculated that Zominthos was not occupied all year round, instead serving as a seasonal residence for a central ruling authority when flocks of sheep were taken to higher ground, thus cooler, for grazing in the summer. Dr Efi Sapouna-Sakellaraki and her team have worked on the large building complex around the main courtyard, covering an area of 1800 square meters. Over the course of their excavations, 71 rooms have been unearthed on the ground floor alone, including pottery workshops, storerooms and frescoed halls. Last summer’s excavations focused on a section of the courtyard paved with irregular slabs, following the slope of the hill. It appears that the elaborate Neopalatial-era palace was built after an earthquake destroyed the earlier site. The central courtyard would have played an important role in priestly rituals and religious ceremonies, and is similar in layout and design to the courtyards found at the contemporary sites of Knossos, Archanes and Phaistos. The excavations also confirmed the older palace complex was much larger than its successor, covering an area of 3000 square meters, in addition to a cemetery. A significant number of portable artifacts were found under the courtyard, including conical-shaped cups of various types (so-called “egg cups’), flint tools, bowls, and pieces of processed rock crystal. Sapouna-Sakellaraki concludes the site was an important and prosperous religious center that served as a mountainside sanctuary near the peak of Mount Ida. The inhabitants amassed wealth from the natural resources of the surrounding countryside (Psiloritis), inlcuding herbs and aromatic plants. The site was abandoned again after a big earthquake around 1600 BC, but appears to have been re-occupied after the Bronze Age and again during Roman times.

Side -The remains of an ancient synagogue dating back as far as the 7th century have been discovered in a resort town on Turkey’s Mediterranean coast.The synagogue was found recently in the town of Side, in southern Turkey. Among the remains was a plaque with a menorah motif and an inscription in Hebrew and Greek stating that it was donated by a father in honor of a son who passed away at a young age. The plaque ends with the Hebrew word “Shalom.” The town was home to Jews for centuries, but until this discovery, there was little evidence of Jewish life there beyond a few records from the late Byzantine period.

Çeşme-Bağlararası - The remains of a young man and a dog who were killed by a tsunami triggered by the eruption of the Thera volcano 3,600 years ago have been unearthed in Turkey. Archaeologists found the pair of skeletons during excavations at Çeşme-Bağlararası, a Late Bronze Age site near Çeşme Bay, on Turkey's western coastline. Despite the eruption of Thera being one of the largest natural disasters in recorded history, this is the first time remains of victims of the event have been unearthed. Moreover, the presence of the tsunami deposits at Çeşme-Bağlararası show that large and destructive waves did arrive in the northern Aegean after Thera went up. Amid stratified sediments at the Çeşme-Bağlararası site, the researchers found the remains of damaged walls — once part of a fortification of some kind —  alongside layers of rubble and chaotic sediments characteristic of tsunami deposits. Within these were two layers of volcanic ash, the second thicker than the first, and a bone-rich layer containing charcoal and other charred remains.  According to the team, the deposits represent at least four consecutive tsunami inundations, each separate but nevertheless resulting from the eruption at Thera.

Sambia Peninsula - Until now, ancient Baltic tribes have been incorrectly branded as being ignorant and dumb. However, the recent discovery of hundreds of Baltic amber elite graves on the Russian Sambia Peninsula, full of imported luxury goods, has proven the existence of a deep and rich pre-Roman culture that completely changes how these peoples should be viewed. The Sambia Peninsula on the Baltic Sea is part of the Kaliningrad oblast in northern Russia. This Baltic amber region was the ancestral home of ancient Baltic kingdoms before it became part of the Teutonic Knights’ 13th-century Prussian kingdom. Recently, four years of modern excavations have revealed the burial site extends for over 8,000 square meters (9,568 square yards) comprising 300 different burial sites. The elite Baltic amber burials and their luxury imported grave goods, dating to the 4th-5th century AD, all serve to kill a dangerous 2,000-year-old Roman propaganda trope, which described ancient Baltic peoples as ignorant, backward barbarians. The Putilovo-2 cemetery is located 5 kilometers (3.1 miles) from the shores of the Baltic Sea in the Zelenogradsky district, and since early 2021 this site has been excavated . The newly discovered artifacts recovered from the Putilovo-2 site date to the 4th-7th century AD.  Most of the human remains were found in clay cremation urns buried in 1.5 meter (5 feet) deep pits and surrounding the urns were weapons, bronze, silver and gold coins, brooches, torques, bracelets, belt buckles, glass, and amber beads, including 100 glass gaming pieces.

- Scientists from Egypt have used three-dimensional CT (computed tomography) scanning to ‘digitally unwrap’ the royal mummy of Amenhotep I. This fact that Amenhotep I’s mummy had never been unwrapped in modern times gave us a unique opportunity: not just to study how he had originally been mummified and buried, but also how he had been treated and reburied twice centuries after his death by High Priests of Amun. Study showed that Amenhotep I was approximately 35 years old when he died. He was approximately 169cm tall, circumcised, and had good teeth. Within his wrappings, he wore 30 amulets and a unique golden girdle with gold beads. We couldn’t find any wounds or disfigurement due to disease to justify the cause of death, except numerous mutilations post mortem, presumably by grave robbers after his first burial. His entrails had been removed by the first mummifiers, but not his brain or heart.”

Sanmenxia - Archaeologists have discovered a cluster of over 260 ancient tombs in the city of Sanmenxia, in central China's Henan Province. Along with these ancient tombs, the excavations revealed a large number of burial objects, including ancient bronze chimes that have not been found in the area for several decades. Nearly 100 of the tombs have been excavated so far, all of which are rectangular in shape. "These tombs from the Warring States Period (475-221 B.C.) were arranged in an orderly way. They might belong to a planned cemetery," said Yan Fei from Sanmenxia's institute of cultural relics and archaeology, who is leading the excavation project.  A large number of burial items, such as bronzeware, jade articles, agate accessories, bronze weapons and bone objects, have been unearthed at the site. A total of nine bronze chimes and 10 stone chimes were also excavated. The discovery of these ancient tombs will provide valuable information for the study of the historical and cultural features of the western Henan in pre-Qin period (pre-221 B.C.), the livelihoods of the people at that time and the layout of cemeteries in the early Warring States Period.