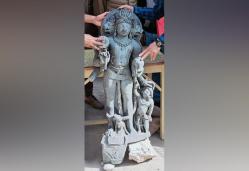 Jhelum-  In a rare archaeological find, a three-headed sculpture of Lord Vishnu, which dates back to 9th century, was found in Jhelum river during extraction of sand in South Kashmir’s Pulwama district. The sculpture was recovered by some labourers  . The finely carved and well dressed sculpture demonstrates clearly the sculptural style in use at Avantipora during the 9th century AD, the officials said. Jerusalem – Researchers were recently surprised to discover organic residues of the exotic, expensive (even until today) spice on wine jars unearthed during excavations in the City of David National Park, located in Jerusalem’s Silwan neighborhood. They say the discovery indicates that the wine was enriched with vanilla, and “fantastically” illustrates which luxury products arrived to Jerusalem, possibly from India and is environs, thanks to its strategic location along the international trade route. The process of “oaking” – the aging of wines in barrels made from oak – which has been around since Roman times imparts an understated vanilla note to wine due to the vanillin chemical compound found in oak. However, the Israeli researchers say their analysis of the residue found three different molecules, which together indicate a fingerprint from vanilla itself, leaving no doubt of the origins of the residue.Their study, recently published in the scientific journal Plos One, describes the results of chemical tests that identified the remnants of these molecules, which have been preserved in the tiny spaces on the side of the pottery vessels. The discovery of vanilla is apparently related to an international trade route that crossed the Negev during the seventh century BCE, initially under the auspices of the Assyrian Empire and later likely under their heirs, the Egyptians, and possibly even the Babylonians. The wine jars, dating to the days of King Zedekiah – the end of the glory days of the Kingdom of Judah – were discovered inside storage rooms of buildings in two different archaeological excavations in the City of David. The two buildings unearthed in the excavations were destroyed during the Babylonian obliteration of Jerusalem in 586 BCE. The jars were discovered smashed inside the rooms, under a collapsed building.

Assam - 65 giant sandstone jars were discovered at new sites in northeastern India during a survey of known jar sites conducted by researchers from ANU, North Eastern Hill University, and Gauhati University. Similar jars have also been found in Laos and Indonesia. The jars at the newly discovered sites vary in shape and decoration. Some of the jars, which reach about ten feet tall and six feet wide, were partially buried while others had been fully buried, explained research team member Nicholas Skopal. “There are stories from the Naga people, the current ethnic groups in north-east India, of finding the Assam jars filled with cremated remains, beads, and other material artifacts,” Skopal said. The jars in all of the locations are thought to be tied to burial rituals.
https://www.anu.edu.au/news/all-news/mysterious-giant-stone-jars-found-in-india

Deir el Medineh - Analytical chemist Ilaria Degano of the University of Pisa and her colleagues have analyzed scents emitted by jars from the 3,400-year-old intact tomb of Kha and Merit, which was discovered in Egypt’s Deir el-Medina necropolis in 1906. The vessels are now held in the Egyptian Museum in Turin. “From talking with the curators, we knew there were some fruity aromas in the display cases,” Degano said. The team members placed sealed jars and open cups holding ancient bits of food in plastic bags for several days to collect volatile molecules. Two-thirds of the vessels yielded samples, Degano explained. These molecules were then identified with a mass spectrometer. The compounds suggest the vessels contained beeswax, dried fish, and fruit. But degradation and decomposition of artifacts can change the smell of artifacts, cautions Cecilia Bembibre of University College London. Separating the original scent from the odor of decomposition and recreating it as part of museum exhibits could offer visitors a better understanding of ancient Egyptians, added archaeologist and analytical chemist Stephen Buckley of the University of York..

Hatfield - Archaeologists have unearthed evidence of the world’s first cash machine dating back to the Roman empire, buried for centuries in an unassuming field in Hatfield. The ‘noteworthy’ discovery suggests Juno Moneta, the Roman Goddess of Money and Funds, was smiling on the British Isles as early as AD 265. The discovery, located in what appears to be the wall of an ancient bakery at the heart of the commercial Roman town, sheds light on how cash was the cornerstone on which the ancient community was founded and clearly shows the Romans were indeed keen on their ‘dough’. The mysterious fragments and collection of Roman coins, dated to the year AD 289, are traces of one of the world’s first automated monetary distribution machines, with clear signs of wear and tear from extensive use by townsfolk. The site points to cultural evolutions showing how shoppers and local shopkeepers alike were clearly ‘cashing in’ on a ready source of money in their town. A Roman vase was also discovered at the site, filled with cash. Archaeologists believe the vase was used for cash storage within the wall so the Hatfield Romans could easily replenish and access their hard ‘urned’ money.

Nafoun - More than 150 archaeological sites  have been discovered in the Nafoun village and about 900 sites in the Wilayat of Duqm in general between 2015 and 2022. 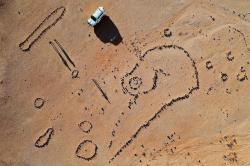 Mithaka - In the heart of Mithaka Country, in Queensland's Channel Country, traditional owners and archaeologists have unearthed what researchers have dubbed "Australia's Silk Road", dating back at least 2,100 years. Researchers have been working at the site since 2017 and are still trying to understand why it was there and what it was used for. Mysterious stone formations are spread across 60,000 square metres, and more than 200 quarry sites have been uncovered so far, with the largest containing 14,000 pits. Carbon dating of the extracted stone puts the site at approximately 2,130 years or older. What they do know is that the Mithaka people's quarry sites were part of a well-developed system of trading grindstones, silcrete tools, seeds and more.

Uruk - Archaeologists have recovered a 4,000-year-old bitumen boat outside the ancient city of Uruk in southern Iraq. The boat was first discovered in 2018 in the archaeological buffer zone around Uruk during a program of systematic documentation of the many remains of canals, agricultural fields, settlements and production sites that pepper the environs of the Sumerian capital, which 1,000 years before this boat was built was the largest city in the world with an estimated population of 80,000 living in the metro area.   The edges of the boat had been exposed by erosion, and archaeologists have been keeping a close eye on its condition in the years since. Last month, the salvage operation began. The Iraqi-German research team successively uncovered the very fragile boat and thus documented the unique finding: it is an almost completely preserved boat made of organic material (reed, palm leaves or wood) completely covered with bitumen. It is 7 m long and up to 1.4 m wide. It is not thicker than 1 cm in many places. The organic remains are no longer preserved and are only visible as imprints in the bitumen. During the excavation the boat was documented three-dimensionally by photogrammetry. The archaeological context shows that it sank at the bank of a river that has since silted up, probably about 4000 years ago, and was overlaid by sediments.

Sarlichak - A rare, completely intact 1,300-year-old Pala period idol has been found  during the cleaning and desilting of a pond at Sarlichak village. The idol made of grey basalt stone is of Nag Devi (serpent goddess) sitting in Padmasana (a cross-legged yogic posture) on a lotus with prayer beads in one hand and an unidentified object, possibly a writing instrument, in another. It is 3ft-10in tall and depicts the deity being shadowed by seven hooded snakes entwined with each other. Its iconographic features suggest that the idol was made in the seventh or eighth century AD during the reign of the Pala dynasty. A Sanskrit inscription written in a proto-Devnagari script, a post-Brahmi script, on the back of the idol says it was “donated by Saint Fana Sen”. It seems the idol had been gifted to a local temple.

- A rare 1,200-year-old silver coin featuring Charlemagne — one of the only known portraits made of the emperor during his lifetime — was recently rediscovered. The coin's modern travels began when a man in France wanted to build a house but was short on cash. He remembered that he had inherited a coin collection from his grandfather, a farmer in the Paris region. After going through his grandfather's collection, the man discovered the Charlemagne coin, known as a denarius. The museum decided to enter a bid. To their relief, they got the coin depicting Charlemagne and his imperial title: IMP(erator) AVG(ustus), a reference to Emperor Augustus, the first Roman emperor and a title used by the many emperors of the Roman Empire, whom Charlemagne was trying to emulate. So, perhaps it's no surprise that, in this coin portrait, Charlemagne "presents himself really as Roman emperor," Pohle told Live Science. "He has the laurel on his hat, which is quite unusual for Frankish kings. He is wearing a dress like a Roman general." The portrait also reveals that Charlemagne had a round face, a mustache and a short neck, the latter a detail noted by Charlemagne's biographer Einhard. The back of the coin features a building, which has a Christian cross on it and looks like a mix between a Roman temple and a church. Museum experts have determined that the 0.5-ounce (1.5 grams) coin was likely minted in Aachen due to the city's importance, as that's where Charlemagne was born and later died. But the date of its minting is unclear.