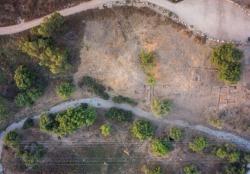 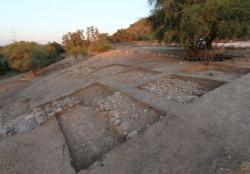 Gath - Archeologists at Bar-Ilan University, headed by Professor Aren Maeir, have discovered the fortifications and entrance gate to the biblical city of Gath in the Philistines, which was once the home of the giant Goliath.  The excavations of the ancient city of Gath, which was once the largest city in the land during the 10-19th century, are being conducted in the Tel Zafit national park, located in the Judean foothills between Jerusalem and Ashkelon. The ancient city was destroyed in 830 BCE by Hazael, the king of Damascus.  Professor Maeir said that the gate is among the largest ever found in Israel and provides substantial evidence that Gath was once one of the most influential cities in the region.  In addition to the gate, an impressive fortification wall was discovered as well as various buildings which serviced the city, including a temple and an iron production facility.

Derawar Fort  - The Punjab government has released a sum of six million rupees to the Archaeology Department for the restoration of damaged boundary wall and bastions of historical Derawar Fort – standing tall on the edge of Cholistan desert to the south east of Dera Nawab in district Bahawalpur. Official sources said the damage caused by rains and ageing process to three bastions and two segments of fort's 80 feet high boundary wall that is around eight to nine feet thick was reported some time ago and government recently approved the proposal and released funds. When asked, and archaeology official said that east-south bastion and 32 feet long portion of the wall attached to it and 19 feet portion of another segment of wall has to be restored. However, he said that exact extent of damage to the boundary wall and its three bastions would be known following his visit to the site to prepare detail report. There has been a fort at Derawar for at least 5,000 years as part of a long chain that protected the ancient trade rout from the Central Asia to the Indian subcontinent, reads a report of the Archaeology Department. The fort was captured by the Abassi family from Raja Rawal Singh of Jaisalmir in 1733 – the time when the fort was built, says the report which suggests that the fort in preset form was built in 1733 AD or earlier. 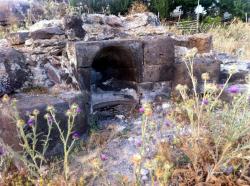 Tomarza - The 300-year-old Armenian monastery of Surp Astvatsatsin (Tomarza Monastery) has completely deteriorated in the Tomarza district of Turkey’s central Anatolian Kayseri province, with merely a few ruined walls remaining.  The monastery, dedicated to the Virgin Mary, is situated in Kayseri’s Cumhuriyet neighborhood. An important location for pilgrimage, the monastery also hosted famous British traveler and archaeologist Gertrude Bell in 1909.  Unfortunately, the monastery was looted and abandoned in 1915. 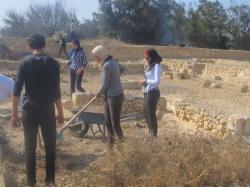 Alexandrie - A full cemetery dating back to the Ptolemaic era and located in the Moustafa Kamel area, was found buried under a pile of garbage. Over time, the historic cemetery turned into a garbage dump after its metal fence was stolen. The fence, which was created to protect the grave site during the January 25th revolution, was illegally broken, seized and sold. Dalia Ezzat, Director of Development and Cultural Awareness of Archaeology in Alexandria, stated that the grave site is one of five located in the Moustafa Kamel area. “The grave site in itself is in good condition as it was carved out from one big rock” she explained.Ezzat called for assistance from students who graduated with Egyptology or Archaeology to help clean and preserve the area. 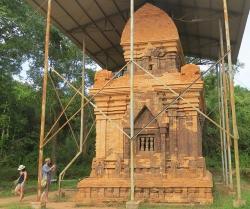 My Son - A Cham tower in the UNESCO heritage site My Son Sanctuary has re-opened for tourists after a four-year facelift. During the restoration, archaeologists discovered many Cham relics, which were handed over to the management of the heritage site. My Son Sanctuary is located about 40 kilometers from the ancient town of Hoi An in Quang Nam Province and nearly 70 kilometers southwest of Da Nang. It is a cluster of partially-ruined Hindu temples built between the 4th century and 13th century when the area was ruled by the Champa Kingdom. Located on 142 hectares, the sanctuary consists of eight groups of 71 standing monuments and an untold number of yet unearthed relics. The My Son Sanctuary were recognized by the UNESCO as a world heritage in 1999.

Isle of Wight - A couple holidaying on the Isle of Wight have uncovered a piece of its ancient history on Sandown Beach. Christopher and June Preece, from Banbury, Oxfordshire, came across a small copper alloy knife in early July thought to date from the Bronze Age, circa 1000 to 800BC. They also found a button from the seventeenth century.  The tourists found the artefacts under a slab of clay whilst metal detecting, and took them to the Visit Isle of Wight visitor centre in Newport Guildhall. 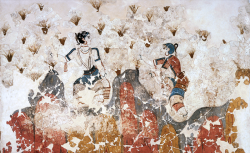 Akrotiri - Kaspersky Lab announces its support of the Archeological Society at Athens (ASA) in its restoration of the murals at the excavation of the Akrotiri settlement on Santorini Island, known as the Greek “Pompeii”. Akrotiri is a Cycladic settlement founded around the middle of the fifth millennium BC (Neolithic period) on the volcanic Greek island of Santorini. It grew into a cosmopolitan city until it was destroyed by a massive eruption over 3,000 years ago and buried under volcanic ash. This has preserved the remains of fine frescoes and many objects and artworks but they are still vulnerable to damage over time. The advanced and sophisticated architecture of this ancient city along with its famous frescoes make this place unique and highly important to be investigated.

CHINE – Dandong - Archeologists in northeast China have begun an underwater investigation in the Yellow Sea to learn more about a war ship sunken by the Japanese navy during the first Sino-Japanese War 121 years ago. The investigation was launched on Saturday in Dandong City, Liaoning Province, where the warship was found during an underwater exploration for port construction last year. Coded "Dandong No. 1," the still intact 50-meter hull is located 10 nautical miles southwest of Dandong Port. The inside of the ship has been badly damaged. Archeologists have concluded the 1,600-tonne vessel is one of the four warships with the Qing Dynasty (1636-1912 A.D.) imperial marine forces Beiyang Fleet, which was defeated by the Japanese navy in the Battle of Yellow Sea on Sept. 17, 1894.

Lochaber - Archaeologists are preparing for the first ever excavation of an ancient hillfort in Lochaber. Dun Deardail was constructed on a prominent knoll on Sgorr Chalum, a hill overlooking the River Nevis in Glen Nevis.Little is known about the origins of the fort, who built it or when it was constructed. The first phase in a three-year project will examine the defences. They were vitrified, meaning stone and wood in the defensive walls were burned at a high temperature for a long time to fuse the stone together. Examples of vitrified forts can be found across Scotland, including in Aberdeenshire. The Lochaber site has never before been excavated or dated with any accuracy. Forestry Commission Scotland, which is supporting the project, said it may have been constructed in the first millennium BC or first millennium AD. The commission said the fort's name may suggest a link with an ancient Irish myth called Deirdre of the Sorrows. The legend tells of a chieftain's daughter who was said to be so beautiful that kings, lords and warriors fought and died to try to win her hand in marriage. The first phase of the excavation will take place from 14 to 28 August. Further digs are planned for 2016 and 2017.

ITALIE – Pompei - Pompeii's Palestra Grande (Large Gymnasium) reopened on Monday after seven years inaugurated by Culture Minister Dario Franceschini..  What was once a gym where youth sport clubs promoted by the Emperor Augustus could train consisted in Antiquity of a large rectangular building surrounding an open green space with porticoes on three sides shaded by a double row of plane trees and with a swimming pool in the middle. Along with the gym, Franceschini unveiled a permanent exhibition of frescoes found at nearby Moregine, a site about 600 metres south of the walls of Pompeii near the mouth of the river Sarno. They were discovered by chance in 1959 during construction of the Naples-Salerno motorway, adorning the walls of what turned out to be a building with at least five frescoed tricliniums (dining rooms) facing on to a courtyard surrounded by porticoes. The frescoes dating back to the era of Nero (54-68 A.D.) are now housed in a permanent exhibition at the Palestra Grande, displayed in three groups depicting the Muses, the twins Castor and Pollux, and the spirit of the river Sarno.