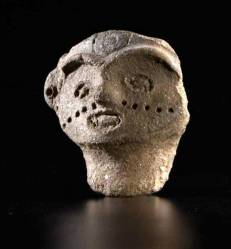 Shuangdun  -  A mysterious piece of pottery shaped as a female head sends a smile from 7,300 years ago, as its host museum in east China's Anhui Province starts a global naming bid for the ancient relic. Ji Yong, curator of the Anhui Bengbu Museum in the city of Bengbu, said the statue was among 600 pieces of pottery unearthed from a New Stone Age site at Shuangdun village in Anhui in 1985. Using Carbon 14 technology, the relics were dated back to 7,300 years ago.However, it is still unknown what the statue was used for and why it was the only one of its kind, with the rest being utensils bearing inscriptions of various symbols believed to be origins of Chinese characters. The statue, made with earth containing mica powder and quartz, is a flickering tattooed female face with marks emblazoned on her forehead that archaeologists have judged as a sun symbol. Measuring 6.5 cm in height and width, the relic is the earliest example of such pottery ever found in China.He suggested naming the statue "The Goddess of the Huaihe River," since the ruins were found on the bank of the Huaihe, which is located in the midway of China's two largest rivers, the Yangtze and Yellow rivers. Shuangdun culture appears in the same period as the late Neolithic group known as the Yangshao, which originated from the middle reaches of the Yellow River, and Majiabang culture where archaeologists excavated 6,000-year-old rice grains in the lower reaches of the Yangtze in present-day Shanghai. "The portrait might be the image of a sorceress," Wang said. There are four-handled kettles and cooking devices unearthed in ruins, where massive animal bones were also discovered. "The discovery of Shuangdun culture suggests that the Huaihe River Basin was one of the origins of Chinese civilization and Chinese characters," Wang said.

Cumbria - A Roman grave has been uncovered during resurfacing work on a road in Cumbria. The remains, which also included fragments of pottery, were found less than a metre under the A66 at Kirkby Thore near Appleby. Lead archaeologist John-James Atkinson said the grave "might have been alongside the old Roman road, which we are still trying to find". "We can certainly say it is Roman as we found some pottery ware typical of early and late occupation in Britain."

Pocklington- The remains of an Iron Age chariot have been found on a construction site in Pocklington. Simon Usher, managing director at Persimmon Homes Yorkshire, said: “We can confirm that a significant archaeological discovery, featuring an Iron Age horse-drawn chariot, has been made at our development, The Mile in Pocklington. “Careful excavation is ongoing by our archaeologists and a thorough investigation is in process to date and detail the find. “Until this process is complete we are not in a position to comment on the possible historical benefit of the find. It comes just a year after another Iron Age chariot and two well-preserved horses were discovered on another building site in the town, David Wilson Homes’ Pavilion Square development. The chariot found last year was only the twenty-sixth to be excavated in the country and was found in an ancient cemetery off Burnby Lane, dating back to 800BC. The deliberate inclusion of horses as part of the burial rite was "highly unusual". The last time such a discovery was made is believed to have been on Arras Hill outside Market Weighton in 1817. The site had already yielded fascinating finds, including the remains of a warrior ritually buried with his sword and four spears placed in his spine and one in his groin, which may have been an attempt "to release his spirit". In all, 79 square barrows were found containing 138 burials from the Arras Culture - a group of people who lived in the region in the Middle Iron Age - and 22 from the Anglian period 600 to 800 years later. Further analysis is expected to reveal more information including whether the local population was indigenous or had continental connections.

Aizanoi -  Some 400 drawings were recorded at the Temple of Zeus in the ancient city of Aizanoi, which is located in western Anatolia, by a team of researchers led by Elif Özer of Pamukkale University. The drawings have been attributed to five or six groups of people, ranging from those who lived in the city during the Byzantine era and used the temple as a Christian church, to the Çavdar Turks who lived in the city in the twelfth and thirteenth centuries. “For instance, there were warriors and their leaders,” Özer said of the images. “These figures were drawn in larger size with larger horses. There are figures that were made smaller and probably depicted the enemy. There are figures of cavalry and hunters. Inside the temple, there are usually figures about revelry. Here we see komuz players and minstrels.” She also pointed out that the Byzantine-era Christians inscribed hundreds of crosses on the walls of the temple, and converted an altar to Zeus near the temple’s eastern entrance into an oven, where the researchers found a bread seal inscribed with a cross. “This shows that the seals with the sign of the cross were printed on the dough and given to the people of that period,” she said.

Cluais Mhór - A rare 800-year-old gold brooch discovered in west Kerry is to be put on public display. The intricate 13th century ring brooch was found by chance by a walker on the seashore near Dingle. The brooch contains a small semi-precious tourmaline stone, a dagger-like pin and is inscribed with gothic lettering. Dr Nessa O'Connor of the National Museum of Ireland says the discovery is significant. "Approximately 150 ring brooches are known from Ireland, but would usually be of copper alloy. To find one made of gold is extremely special," she said. The brooch was found amongst stones by Englishman Ian Andrew, as he walked along the seashore at Cluais Mhór. "It's a remarkable find, a first for Kerry. Of course Dingle was a big medieval town, perhaps a young man or woman lost it while walking here, maybe it was washed out of the soil above the strand or perhaps it was carried here by a bird. Who knows, it's a mystery," she said. Archaeologists have yet to decipher the meaning of the inscription on the brooch. While most of the letters are legible, their meaning is unclear and they may represent a type of code. Dr O'Connor believes the brooch may have had a magical or talismanic association for the wearer. "We know from similar brooches found elsewhere that they were inscribed with codes or short prayers seeking protection from diseases common in the 13th and 14th centuries, such as the black plague," she said.

Turan - The excavations near the village of Turan, which ended Friday after 18 months, have unearthed one of the biggest ancient cemeteries in Albania, with about 1,000 layered burials, several of them richly furnished.
And under the bottom layer are traces of a rare Neolithic settlement demarcated by holes in the ground that supported the now-rotted wooden skeletons of small huts. More than 20 Neolithic sites have been found in Albania, dating roughly from the 7th to the 3rd millennia B.C., which are some of the earliest farming settlements in Europe. But according to Turan lead archaeologist Iris Pojani, the pipeline work provided the opportunity — and the funding — to excavate an unusually large inhabited area from that era.