Thame - Prehistoric finds which prove that humans have lived in Thame for at least 6,000 years have been uncovered. Evidence of human activity, including the remains of prehistoric monuments and settlements going back to the neolithic period have been found during an archeological dig just off Oxford Road. One of the most important finds was a rare causewayed enclosure dating back to around 3,700BC, one of only 80 known to exist in Britain.

Skye - A piece of bone possibly handcrafted into a shape for use as a toggle or bead has been uncovered during an archaeological dig on Skye. Archaeologists hope further analysis of the find will connect it to Mesolithic hunter-gatherers who lived on the island 8,000 years ago. Flints were also found during September's dig above Staffin Bay. Dan Lee, of UHI, said the site may have been one of several along Staffin Bay where hunter-gatherers gathered and worked stone and bone. These people may also have hunted fish and mammals at the mouth of the nearby Kilmartin River. Trust director Dugald Ross added: "The excavation has given us the opportunity of adding to our knowledge of early habitation of Staffin and although the circular foundation now appears to be a later date than initially thought, the lower levels have yielded material which is typical of the first groups of people to have arrived in Scotland after the last Ice Age." During the Mesolithic period, also known as the Middle Stone Age, Scotland was inhabited by hunter-gatherers who lived off the wild resources of the land and sea.

Soli Pompeiopolis - Excavation works on the ancient site of Soli Pompeiopolis have ended for the season in the southern province of Mersin’s Mezitli district. Archaeological teams brought to light various artifacts from a villa from the Late Roman Era to sesterces, an ancient Roman coin, during the 17th round of works on Soli, one of the most important port cities of the Roman era. A team of 100 people led by Professor Remzi Yağcı from 9 Eylül University has worked on the Soli Mound, a Roman villa and a Roman street line with columns, unearthing artifacts from the Cilician period dating back 3,000 years.A structure believed to have been an archaic temple used in the sixth or fifth century B.C. was discovered, along with ceramic findings, kitchen appliances, sesterces from the 3th century A.D., a structure believed to be a villa, and an apsis channel system dating back to at least the Byzantine era. 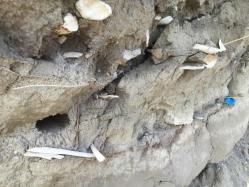 Calgary - Two years after floods tore through communities across southern Alberta, archeologists are still exploring what was unearthed by the raging water. At FM Ranch, an ancient bison jump just south of the Calgary city limits, the flood exposed “thousands and thousands” of bison bones, and significantly changed a major archaeological resource for the better. “There’s no question we lost a lot (in the flood). But, there’s a silver lining in the fact the new exposures have revealed hundreds of previously undiscovered sites,” said Darryl Bereziuk, director of the archaeological survey unit. Students from the University of Calgary’s archeology department joined archaeologists with Alberta Culture and Tourism at the site on Thursday afternoon to excavate animal bones and artifacts including stone tools and ancient pottery. “It’s really quite a fascinating and interesting spot,” Bereziuk said. “You can stand there and envision a bison jump having occurred, with bison at the bottom of the slope and all the processing activities: bison butchering, boiling pits, stone toolmaking.”