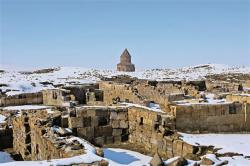 Ani - Restorations will continue this year at the ancient site of Ani, on Turkey’s border with Armenia, where new artifacts are continuing to come to light. Work is continuing at the ancient ruins of Ani, a 5,000-year-old Armenian city located on the Turkish-Armenian border in the eastern province of Kars, with an eye on including the site on UNESCO’s World Heritage List. Ani, which occupies 78 hectares of land and is surrounded by 4,500-meter-long ramparts, was once the capital of a medieval Armenian kingdom that covered much of present-day Armenia and eastern Turkey. Ani is protected on its eastern side by a ravine formed by the Akhurian River and on its western side by the Bostanlar or Tzaghkotzadzor Balley. The Akhurian is a branch of the Aras River and forms part of the current border between Turkey and Armenia. Dubbed the “City of 1,001 Churches,” Ani stood on various trade routes, and its many religious buildings, palaces, and fortifications were among the most technically and artistically advanced structures in the world at the time, according to specialists.
http://www.hurriyetdailynews.com/work-ongoing-to-put-ani-on-unesco-heritage-list-.aspx?pageID=238&nID=79072&NewsCatID=375

Viborg - The culture authorities Kulturstyrelsen initially though it was a joke, but after the chuckles had subsided, they realised that Viborg Museum's application to use moles in an archaeological project was in fact legitimate and rather ingenious. So they approved it. The museum has since used the burrow-digging moles to gather important information from the earth at a historic mound by analysing the dirt piles that the moles leave behind while burrowing. ”We are always fans of new methods of investigating historic times without destroying them,” Jørgen Frandsen, a Kulturstyrelsen consultant told Politiken newspaper. The burrowing mammals have contributed to the project south of Viborg where archaeologists believe the remains of a fort from the Middle Ages lie hidden beneath the surface. Jesper Hjermind, the Viborg Museum inspector and archaeologist specialising in the Middle Ages who came up with the idea, said the concept is based on moles bringing brick, pottery and other smaller items to the surface in their dirt mounds. ”The closer we get to a building, the higher the content of items per litre we find,” Hjermind said. ”It's simple, but it works.” When the information has been analysed in a database, it provides an overview of where the remains of buildings can be found under ground. 'Moleology', as Hjermind calls it, is capable of achieving the same results as technical research methods. ”The huge reward is that we haven't destroyed anything at the historical mounds in order to get a lot of important information,” Hjermind said.

Bagan - Myanmar’s Department of Archaeology, National Museum and Library has called on the public to pitch in and help to preserve hand-painted murals in temples near  Bagan. The department’s deputy general director, Thein Lwin, told Irrawaddy media that the department, works under the Ministry of Culture and has received support from several foreign organisations and the UN cultural body, UNESCO to start the restorations. “However, as there are more than 400 pagodas [housing murals], it is not easy for us to take care of them within our annual budget. There has been international assistance, but it is still not enough,” he said adding people interested in restoration can make contributions. Ananda Temple, one of Bagan’s most well-preserved and most frequently visited temples, is among the sites with intricate murals requiring regular maintenance. This and many other pagodas in the Bagan Archaeological Zone have fallen into disrepair over the centuries, and were damaged by whitewash treatments by the former military junta in the 1990s. The Bagan historical area spans about 42 sq km (16 miles) and is peppered with more than 3,000 temples, built between the 9th and 11th centuries, when some 55 Buddhist kings ruled the Bagan Dynasty.

Glastonbury - Recent construction work in South Glastonbury inadvertently uncovered evidence of an ancient Native American site. The Office of State Archaeology, with the support of volunteers, excavated the site and documented a number of cooking artifacts and the portion of what might be a house floor. Associated artifacts suggest that Native Americans used the site about 4,000 years ago. 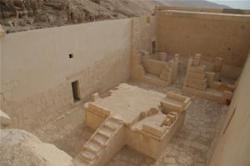 Deir el Bahari - Opening ceremony of the Solar Cult Complex in the temple of Hatshepsut, reconstructed by the Poles, was held on Sunday, February 22 - reported the University of Warsaw on its website. Temple of Hatshepsut is considered one of the most original and picturesque structures of its kind in Egypt. It was built in the fifteenth century BC beneath the cliffs at Deir el Bahari, in honor of one of the few women who ruled Egypt. The building, partly carved in rock, consists of three terraces connected by ramps and topped with porticos. Polish work on the reconstruction of the Upper Terrace of Hatshepsut’s temple started in the 1960s, under the supervision of Prof. Kazimierz Michałowski. Currently, the mission is headed by Dr. Zbigniew Szafrański. Solar Cult Complex is a group of rooms located in the northern part of the Upper Terrace, which consists of the Night Sun Chapel, Solar Altar Court and the Anubis Shrine. As the researchers explain, this it the place of worship of Amun-Ra, as well as Ra- Horachty and Atum-Amun - representing two other aspects of the solar god. Night Sun Chapel is located in the eastern part of the complex, reflecting the idea of the resurrection of the sun on the eastern horizon after an overnight journey by barge through the Underworld. Sculptural decoration of the chapel illustrated the overnight journey. The altar, according to Egyptian custom, is located in the courtyard under the open sky, so that the life-giving rays can reach it without hindrance. The priests would walk up the stairs to the top of the altar to offer sacrifice to the Sun - the researchers believe. 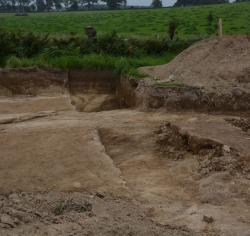 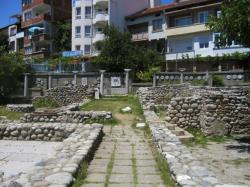 Sandanski - Bulgarian archaeologists discovered in the town of Sandanski a bronze cross, which is estimated to be 1500-years-old. The cross, which was found during excavations in the Bishop’s basilica, had been used in liturgical processions in the 5th and 6th centuries AD, private News 7 TV reports. The Bishop’s basilica is one of the largest archaeological monuments from the early Christian period in Bulgaria. The discovery was unexpected as it was thought that all movable monuments and vessels used in liturgies had been taken out by the clergy when the basilica went on fire. Prior to the discovery of the 55-centimetre cross, archaeologists had unearthed two similar crosses, but of smaller size. The archaeological excavations at the basilica should be completed by the end of the summer. The cross will be exhibited at an archaeological park in a museum in Sandanski, where most of the early Christian monuments will be displayed.

EGYPTE - Tal Habwa - A Pharaonic royal rest house had been discovered east of the Suez Canal, Antiquities Minister Mamdouh al-Damaty said on Monday. The rest house, belonging to King Tuthmosis II, was unearthed in Tal Habwa, Qantara in the Ismailia governorate, the minister announced during a visit to archaeological sites east of the Suez Canal. It is one of three rest houses that had previously been discovered, belonging to Pharaoh King Seti I and the other to Ramses II, the minister added, noting that the newly found structure is made of mudbrick.