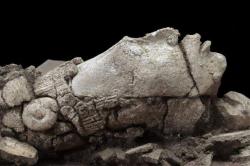 Palenque - Archaeologists have uncovered a roughly 1,300-year-old sculpture representing the head of a Mayan maize god in ruins in southeastern Mexico. The artefact was found in Palenque facing east to west, which would symbolise the birth of the maize plant with the first rays of the sun. The sculpture was part of "an offering that was placed on a pond, emulating the entrance of the deity to the underworld, in an aquatic environment. The discovery "allows us to begin to know how the ancient Maya of Palenque constantly relived the mythical passage of the birth, death and resurrection of the maize deity", said researcher Arnoldo Gonzalez Cruz.

ITALIE – Montale - Archeologists in Montale, northern Italy have found evidence of Bronze Age industrial wool manufacturing. A peer-reviewed study, published in the Journal of Archeological Science details precisely how researchers came to this conclusion. The analyses showed that most of the animals raised in the Montale area also died there and thus were likely carefully managed by the local community. This gives further support to theories about large-scale wool production in Bronze Age Montale.  One sheep, two sheep, how many sheep to make 1kg of wool? Existing historical research from the region indicates that it took a flock of ten sheep a full year to produce 3kg of wool - a simple cloth of about 12 square meters required 4kg of raw wool. Beit She’arim - About 1,800 years ago, a convert to Judaism named Yaakov died and was interred in a cave at Beit She’arim, with a hex designed to deter grave robbers that looks like it was scrawled on the limestone slab in blood. It wasn’t. It was scribbled in uneven Greek writing in scarlet paint. We know he was a convert to Judaism because the full reference to the deceased is “Yaakov HaGer” – Jacob the Proselyte. We may also surmise that he died at age 60. Beit She’arim was a Jewish town in the Lower Galilee during the Roman period, which arose in the late first century C.E. Following Jerusalem’s total destruction in 70 C.E., the town became a center of Jewish culture and learning: the Sanhedrin Jewish council moved there. Among the deceased buried in the town’s necropolis were Jewish sages, including the famed Rabbi Judah the Prince, redactor and editor of the Mishnah in the second century. Though the Beit She’arim necropolis had been studied quite extensively, the catacomb in which Yaakov HaGer had been buried had been unknown until last year, when it was found by serendipity. It turned out to be part of a complex of interconnected burial caves, archaeologists from the Israel Antiquities Authority and University of Haifa revealed on Wednesday. Conwy - A pair of rare artefacts dating back around 3,400 years to the Middle Bronze Age have been declared treasure after they were uncovered in North Wales almost five years ago. The two bronze mould valves were used to cast palstaves (a kind of axe) during the Bronze Age. The moulds are about eight inches in length and feature a single midrib decoration with a side-loop. The two mould valves, which date back to 1400-1275 BCE, once formed a matching pair, the two locking together – one a positive valve with projecting tenons and the other the negative valve with matching recesses. The outer surfaces have raised rib and moulding decoration, each of a slightly differing design. The growing evidence for moulds and palstave hoard finds in this area suggests that a range of bronze palstaves with midrib decorations were made here and were then exchanged and transported over long distances at this time, to their place of use. It is likely that the nearby Great Orme Bronze Age copper mines, some of the most important prehistoric mines in Europe and in their heyday during the Middle Bronze Age, provided the local source of copper for bronzesmiths. "Tin from Cornwall was accessed, to mix with the molten copper to form these bronze artefacts. This matching pair of moulds appears to have been deliberately buried, rather than being recycled at the end of their lives, perhaps during a symbolic act of returning these powerful objects to their place of origin.”

Xiol - Archaeologists have found the ruins of an ancient Mayan city on a construction site. Palaces, plazas and pyramids form a part of the site where an industrial park was going to be built. The discovery was made near a place called Mérida on Mexico's Yucatán peninsula in the South East of the country. Experts say the site, called Xiol, has features of the Mayan Puuc style of architecture which is rare in that area. Historians say the Mayan people were a civilisation that existed from around 250 AD to around 900 AD. The city is thought to have been occupied from 600 to 900 AD. "We think more than 4,000 people lived around here," said Carlos Peraza, one of the archaeologists who led the excavation of the city. Archaeologists also discovered pots and flint tools as well as the remains of marine life which suggested the people who lived there fished as well as farmed to get food.

PEROU – Ampato - Inca children who were chosen to be ritually sacrificed were drugged so that they remained calm before their death, a new study of ancient hair and fingernail samples has confirmed. Earlier studies have found that ritual human sacrifice, known as capacocha, was a common practice in the ancient Incan society carried out by priests hoping to control the population. Sacrifices were generally conducted in the Incan society to celebrate major events like the birth of a royal, or a battle victory. In the new study, published recently in the Journal of Archaeological Science, researchers conducted toxicological analysis of two individuals – aged six or seven – who were immolated over 500 years ago during a capacocha ritual on the mountain of Ampato in southern Peru. In the hair and nail samples of the Incan mummies, scientists looked for the presence of intoxicating chemicals like cocaine and its breakdown products in the body such as benzoylecgonine and cocaethylene. They also looked for other intoxicating and hallucinogenic chemicals like mescaline, tryptamine, harmaline and harmine that have psychoactive properties. Archaeologists found that during the last weeks of the victims’ lives, they chewed on coca leaves and were intoxicated by ayahuasca, a beverage made primarily from the South American hallucinogenic flowering vine yage, or Banisteriopsis caapi.Researchers suspect the Incas may have consciously used the antidepressant properties of Banisteriopsis caapi “to reduce the anxiety and depressive states of the victims”. While scientists did not find evidence of the hallucinogenic molecule DMT – another major ingredient in ayahuasca – they said it is unclear if the absence of this substance was an accident. They said the children likely knew what was going to happen to them, weeks in advance, and may not have gone along willingly.