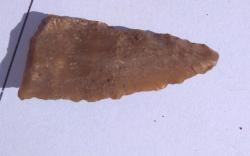 Barkan - A group of first grade pupils from Benzion Netanyahu school in the Samaria-area West Bank settlement Barkan recently uncovered an unprecedented archaeological find: a stone-age hunting knife from 10,000 years ago — the earliest evidence of settlement in the region.  In addition to the ancient flint hunting knife, pupils have uncovered Talmudic-era mosaic pieces and coins at the school excavation near the Barkan industrial zone, about 25 kilometers from Tel Aviv. In other areas of Israel and the West Bank, there is rich evidence of Stone Age settlement. In 2016, archaeologists discovered the remains of a prehistoric village in the Jordan Valley west of the Sea of Galilee, dating from around 12,000 years ago. That site is unique in that it preserved cultural characteristics typical of both the Old Stone Age — known as the Paleolithic period — and the New Stone Age, known as the Neolithic period. Earlier, in 2012, an excavation at Tel Motza, a Stone Age site outside Jerusalem which appears to have been one of the largest settlements in the area at that time, uncovered two stone animal figurines, a ram and a buffalo, from 9,000 years ago. A year later, archaeologists at a site near Haifa discovered obsidian arrowheads and fertility objects, such as a stone phallus and a carved depiction of female genitalia that date from the same period.

Inchinnan - For generations, people in the Renfrewshire community of Inchinnan have assumed that the burial stones in the grounds of their parish church were a legacy from medieval times. But a new analysis of the ancient artefacts using the latest imaging techniques has found that they are several centuries older than first thought. It is believed they were used to mark the final resting place of prominent figures from the long-lost kingdom of Strathclyde, a historically significant yet poorly documented stronghold which reached its zenith as the Vikings were waging bloody raids on ­Scotland. Until now, historians believed the three burial stones – long slabs featuring various carvings – dated back to around the 12th century. They originally came from the long-demolished All Hallows Church, itself a replacement of the earlier Inchinnan Old Parish Church, which was active in medieval times and dedicated to St Conval, who is thought to have established a monastery near the site around AD 600. Clara Molina Sanchez, a conservation expert at the Edinburgh-based firm Spectrum Heritage, used a multi-imaging technique known as reflectance transformation imaging (RTI), which provides detailed information about a material’s surface. It allowed experts to create a virtual model of the stones and, using photogrammetry – the science of taking measurements from photographs – they were able to identify details such as swords and other inscriptions. With the help of Megan Kasten, a PhD student at the University of Glasgow – who has studied the history of the Govan Stones, which date back to the ninth century and were sent on loan to the British Museum in 2014 – the significance of the Inchinnan artefacts became clear. Studying the three dimensional models, Ms Kasten noticed one of the stones had a cross design on the top third, as well as faint panels of interlacing, just like the stones in Govan.
https://www.scotsman.com/lifestyle/resting-place-of-leaders-of-lost-kingdom-on-strathclyde-found-1-4651577

CHINE – Mopan - Archaeologists in northeast China's Jilin Province have unearthed the ruins of a granary, which has been dated back to the Eastern Xia Kingdom about 800 years ago. Located in Mopan Village in the Korean Autonomous Prefecture of Yanbian, the ruins are 21.25 meters long and 7.5 meters wide, according to the Jilin Institute of Archaeology. "They are surrounded by a drainage ditch. Ceramic tiles are scattered everywhere in the ruins. Such an architectural form is unique to the Eastern Xia Kingdom," said Li Qiang, who leads the archaeological team. They also found a variety of scorched crops in the ruins, including a large amount of millet and small red bean, and a small quantity of wheat and buckwheat. Researchers presume that Mongolian troops occupied the capital of the Eastern Xia Kingdom and burned its state granary. The collapsed buildings buried the unburnt crops and kept them intact underground for eight centuries. The Eastern Xia was a short-lived kingdom established in today's northeast China by a Jurchen warlord in 1215. It was conquered by the Mongols in 1233. "The new discovery will be valuable to the study of the dietary patterns, agriculture and economic development of the Eastern Xia Kingdom in the future," said Feng Enxue, an archaeologist with Jilin University.

Kunal - More than eight months after evidence was found of a bead workshop in Kunal, Fatehabad, a team of archaeologists will be setting out for the site in January for what they hope will be fresh discoveries.
This site, three hours out of Gurgaon, is known to date back to the early Harappan era, though it has been speculated that it goes even further back. It is the oldest site to have been discovered in Haryana. The team, says Banani Bhattacharya - deputy director, department of archaeology and museums, Government of Haryana - is keen on understanding more about settlement patterns in the area. "It's an early Harappan site, and we have got evidence up to the PGW (painted grey ware) culture also," she told TOI, adding, "We have to see if the PGW culture correlates with the late Harappan phase, or if it's a separate culture altogether." This was the first time that such a workshop was discovered in the state (incidentally, a copper smelting zone was unearthed here in the 1990s). But it differed from other workshops found elsewhere, in that steatite (soapstone) was being used to make beads of exceptional quality. For, when it came to trade, beads were among the most important items. "The raw materials for these beads came to Kunal from Gujarat and Rajasthan, but the skilled workers were in Haryana, making beads from carnelians, agate, jasper and lapis lazuli," described Bhattacharya.
Moreover, there's proof that there was contact with other areas, up to Central Asia, and maybe as far afield as Mesopotamia. "For example, we also found some gold beads, which must have come from somewhere else since there is no gold mine in the surrounding area. "The routes of that age, that is something we have to decipher," Bhattacharya added. It remains to be seen whether the latest phase of excavations will help archaeologists and historians get closer to solving the fascinating jigsaw puzzle that is Harappan (and pre-Harappan) India.
https://timesofindia.indiatimes.com/city/gurgaon/new-year-promises-new-finds-at-harappan-site/articleshow/62330211.cms

INDE - Sheikhpura  - A mound spotted by Bihar Chief Minister Nitish Kumar at a village in Sheikhpura district has yielded potsherds, perhaps dating back to 1000 BC. Potsherds are pieces of broken ceramic pot or other earthenware that have archaeological significance. “Black slip wares and black and red wares found at the site appear to be of a period around 1000 BC. We also found some red furnished ware that could date back to the Neolithic period,” Mr Chaudhary told PTI.
https://www.siasat.com/news/mound-spotted-nitish-kumar-yields-3000-year-old-potsherds-1291392/

Lincoln - Archaeologists from Network Archaeology Ltd have teamed up with Lincolnshire Live to reveal more about the incredible artifacts from a dig along part of the route of Lincoln's Eastern Bypass. Here, Dr Richard Moore and director Christopher Taylor continue their Find of the Week series, and this week they share the amazing find of a sunken 'pit house'...The photograph, from our drone operator, shows four members of our team hard at work, in the base of a shallow rectangular pit, on an exposed hillside south of Washingborough Road. The team discovered a post-hole at each corner of the pit, and two larger post-holes in the centre of each end. Archaeologists recognise this layout of pit and post-holes as a ‘sunken featured building’, usually abbreviated to SFB. We know from the kinds of objects that we find in these structures that they date from after the collapse of Roman rule: the fifth century AD and beyond. Indeed, our SFB produced post-Roman ‘domestic’ finds (pottery, animal bone, metal objects, and a bone comb). We are much less sure about what these structures would have looked like when in use. Our best guess is that the larger holes at either end would have held upright wooden posts, joined by a cross-bar forming the ridge of a tent-like roof. The roof was probably thatched. The four corner posts may have supported low walls and also a timber floor, spanning the rectangular pit. The shallow pit beneath the floor would have let air circulate, keeping the inside of the building dry, and may also have been used for storage. In north-west Europe, there are similar remains, generally known by their German name, Grubenhaus, which roughly translates as ‘pit house’. This seems to have been where this style of building came from. English immigrants to Britain came originally to supply manpower for the Roman legions, but in the fifth and sixth centuries, many more would have come to join them, escaping from the mass upheavals of peoples – the vandals, goths, franks and huns of our history books among them – that were convulsing Europe.