Abousir - The Czech archaeological mission operating in Abusir, north of the Saqqara region in Giza and headed by archaeologist Miroslav Barta has uncovered a huge limestone and brick tomb for a man identified as Kaer S, dating back to the middle of the Fifth Dynasty in the eras of King Nyuserre Ini and King Neferirkare Kakai. Secretary General of the Supreme Council of Antiquities Mostafa al-Waziry said that the owner of the tomb had several titles, including the “Supervisor of the King’s affairs”, and that his name was found engraved on the walls of the cemetery. Adel Okasha, director of the Central Department of Antiquities of Cairo and Giza, said that during the excavation the mission found a rose granite statue in the main well of the tomb, broken into two parts. The statue represents Kaer S sitting on a small backless chair, while wearing a short beret and a hair wig. His name as well as his titles were engraved on the seat. His titles included the “Morning House Secret Keeper”, and “His Master’s Beloved”. Barta said the archaeological mission will complete work to uncover the rest of the tomb.

Begur lake - The founders of the project 'Inscription Stones of Bangalore' have discovered a hero-stone inside the Begur lake, which they surmise, dates back to the 5th century Ganga dynasty rule in Karnataka.  "There is no inscription visible as of now. Excavation is required to get more details," said Vinay Kumar of Inscription Stones of Bangalore. "We have informed the archaeology department and they might visit the site on Thursday."  The Ganga dynasty, which ruled Karnataka between the 4th and 11th century, was spread over the southern and eastern parts of the former Mysore State and the Cauvery River. The entire district of the present Bengaluru district formed a part of a region called Gangavadi. Interestingly, the name 'Bengaluru' appears for the first time in a Gang-era inscription dated about 900 AD. A hero-stone in the Nagesvara temple complex in Begur records the death of a servant of Nagattara in the battle of 'Bengaluru'."It appears that a mantapa (pillared outdoor hall or pavilion) covering the stone tablet has been destroyed during the construction of a walking track around the (Begur) lake. We are yet to get permission for excavation or relocation of the stone," said Kumar. More details about the historical relevance of the stone will be studied by experts once the stone has been excavated

Xlendi - Some 110 metres underwater off the coast of Xlendi Bay there lay, for centuries, an archaeological treasure that is now warming the cockles of archaeologists and historians. Unearthed in an expedition that was far from your ring-lost-in-the-sand search, the mesmerising shipwreck clasps intriguing artefacts dating back to 700 BC, knowing their origin to Phoenician traders. And for the first time on these islands, a selection of the artefacts – from what Heritage Malta describes as the oldest wreck ever found in this region – are on public display, at the Cittadella in Gozo. There were at least two reasons why this archaeological discovery could be called a ‘treasure’, said Dr Azzopardi. “One is its massive size. We’re not talking here about a single object but about a whole wreck. Two, it looks like the wreck is the oldest from the Classical period ever found in the Mediterranean.” 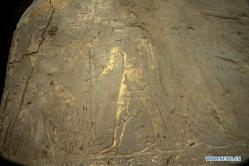 Kom Ombo - Egyptian archaeologists have discovered two ancient sandstone paintings in Upper Egypt's province of Aswan, Egyptian Ministry of Antiquities said Sunday. This discovery was made by the Egyptian archaeological mission at the Kom Ombo Temple in Aswan. According to Mostafa Waziri, head of Egypt's Supreme Council of Antiquities, the first painting belongs to King Seti I of the 19th Dynasty, who ruled Egypt from 1290 to 1279 BC, while the other one belongs to King Ptolemy IV who ruled Egypt from 221 to 204 BC. The first painting is 2.3 meters long and 1 meter wide, while the other is 3.25 meters long and 1.15 meters wide. Both measure 30 cm thick, Waziri said. The first painting was found broken into two pieces but the drawings and inscriptions were still in good condition, he noted. "The second one was found broken into several pieces but our restoration team at the ministry repaired and assembled them," Waziri added. The first painting shows King Seti I standing in front of ancient Egyptian gods Horus and Sobek, with the sun above as a symbol of protection. As for the second, it portrays King Ptolemy IV, his wife and Egyptian deities.

Samothrace - Emory University and the Institute of Fine Arts of New York University completed a summer of excavations at the Sanctuary of Great Gods on Samothrace in northern Greece on August 8, the Greek Ministry of Culture said on Friday. It was the first excavation session after a 22-year hiatus, focused on the stoa in the western section of the sanctuary and the monuments on the terrace it stood on, as well as on the publication of the findings. The sanctuary was dedicated to the mystery cult of the Great Gods and was first excavated in 1873 by Austrian archaeologists. Findings suggest that there was religious activity on the site in the 7th century BC, but the construction of the monumental buildings began in the 4th century BC and is associated with the royal house of Macedon. The sanctuary attained its greatest glory in the 3rd and 2nd centuries BC, and was abandoned towards the end of the 4th century AD. This year’s excavations on the western section of the sanctuary included the stoa, the perivolos (a court surrounded by a low wall) where the famed Nike of Samothrace statue stood, and the theater. Excavations at the theater brought to light anew some architectural pieces found in the 1923 excavations. Specifically, fragments of statue bases made of red rhyolite and white limestone, and the remnants of a large ceramic pipe with a diameter of around 0.25 m, which ran under the theater, the ministry said. “The stoa is impressive both for its scale – around 104 meters in length – and its material, because it is the only large monument in the sanctuary that has been constructed solely of local limestone, which came from the quarry of Akrotiri, near the present area of Kamariotissa,” the ministry statement said. The terrace surrounding the Stoa, the ministry noted, “was an excellent spot of showcasing large-scale votive offerings which surrounded the Stoa. The most impressive of all, undoubtedly, was the Nike of Samothrace monument.” The statue is in the Louvre Museum in Paris. Although there is no single stone on its retaining wall that survives in its original position, a multitude of architectural pieces have been found, namely more than 1,700 limestone pieces, 1,000 fragments from the roofing and multiple fragments from the decoration of interior walls. The excavation team also worked further on a 3D digital model of the Sanctuary, the ministry added, on the measurements and ratios of architecture on Samothrace, and on the analysis of local stones used in the architecture and statuary of the sanctuary. Tappeh-Kheibar - Experts from Berlin and Copenhagen universities along with their Iranian fellows have recently commenced several excavations at Tappeh-Kheibar, one of abundant archaeological sites in Ravansar county, western Iran.“It marks the first archaeological survey in Ravansar and its achievements will be of high importance for both the region and the country,” CHTN quoted Seyfollah Ranjbar, Ravansar’s tourism chief, as saying on Saturday. “This historical site [Tappeh-Kheibar] is estimated to bear relics from the 5th millennium BC to the Parthian era (247 BC – 224 CE),” the official stated. Located in Kermanshah province, Ravansar embraces 57 historical tappehs (mounts) which are deemed as very significant sources of search in the region, he added.