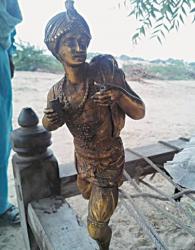 Badin - A team of experts is being sent to the Vidhri Chak area of Wango town on Thursday to examine a number of statues and other objects said to have been discovered during the digging of earth along the Hakro River’s dried bed by a group of villagers last week. The villagers showed the discoveries — which include brass and stone statues and coins — to some local antiquities buffs, Khalid Kumbhar, Bharoo Mal, Mir Buledi and others, who said the objects seemed to be of historical importance and must be examined by experts to establish their age and origin. They were of the view that the artefacts might be of the ancient Hakro civilisation. 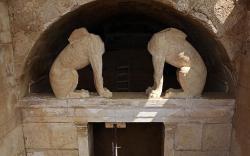 Amphipolis - A massive ancient tomb recently opened in northern Greece was likely a monument to Hephaestion, the close companion of Alexander the Great, experts working on the monument said Wednesday. ”We surmise it was a funerary heroon (hero worship shrine) dedicated to Hephaestion,” the sites head archaeologist Katerina Peristeri told reporters, adding however: “I do not know if he is buried inside.” According to ancient historian Plutarch, when Hephaestion died suddenly in Ecbatana, Iran, “Alexander asked (his architect) Deinokrates to erect shrines all over the country,” she added. It was dug up in 2012 and opened last summer amid speculation that it was built for someone close to Alexander like his mother Olympias or wife Roxana. But a room-by-room search of the massive box-like tomb has failed to give conclusive answers to date. Though the remains of an elderly woman were found - raising hopes it could be Alexander's mother - the bones of two men, a newborn baby and animals including a horse were also discovered. Peristeri and her head architect Michalis Lefantzis on Wednesday said they had found three inscriptions with the word 'parelavon' (received) and Hephaestion's monogramme. Peristeri's findings have been called into question by other archaeologists who claim the tomb was built under the Romans, not the Macedonians. However, Peristeri insists the complex was built in the final quarter of the fourth century BC (325-300 BC)and was used until Roman times 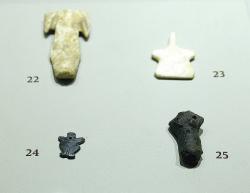 Ephese - An amulet figure that has been unearthed during excavations at the Çukuriçi mound in Ephesus has revealed that the ancient city is actually nine millennia old. Made of black stone and believed to have been used as jewelry, the 2.1-centimeter amulet brings the history of Ephesus 9,000 years back – a full 1,000 years earlier than previously believed.  The figure is now on display at the Ephesus Museum. The museum’s director, Cengiz Topal, said the figure was found in 2013 during Çukuriçi Mound excavations and delivered to the facility. Stating that experts had worked on the figure to determine its history, Topal said: “According to their evaluations, the figure dates back to the seventh century B.C., the Neolithic Age. At the time, the history of the settlement in and around Ephesus dated back to 7,000 B.C. The details on the figure completely have the traces of the Neolithic Age. Elements like breasts and hips on the figure are exaggerated; they were made with an engraving technique. The face is not detailed.  Since it was used as an amulet, it has a hole in its neck part.”  The 9,000-year-old piece of jewelry, which changes the history of Ephesus, bears similarities with artifacts that were unearthed during excavations in other places in Anatolia, said Topal. “We know that similar examples have been found in the Hacışar Mound in Burdur, the Ulucak Mound in İzmir and in Greece.” Topal defended the idea that the figure changed the history of Ephesus. “According to previous data, the history of Ephesus dated back to the 4,500s B.C. and later on to the 6,000s B.C. But considering the excavations in the Çukuriçi and Arvalya mounds, we can say that it dates back to the Neolithic Age, namely, the 7,000s. The ancient city had a history of 6,000 years. This figure made us to reconsider the history of settlement in all of Anatolia. It dates back to the Neolithic Age – 9,000 years ago.” 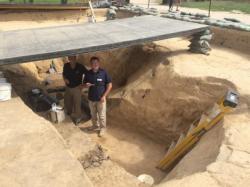 Jamestown - A team of archaeologists from Preservation Virginia has been at work since 1994 uncovering the buried secrets of Jamestown. When the Jamestown Rediscovery Archaeological Project started, the hope was to find the site of the original 1607 James Fort, which had been written off for more than 200 years as lost to shoreline erosion. Since then, the team has discovered the fort and more than a million artifacts in the ground. The Jamestown Rediscovery team continues to make progress excavating a cellar that was once part of a building immediately outside of the perimeter of the original James Fort. Staff archaeologists have officially confirmed a structure inside the cellar is in fact a well, and they anticipate excavation will begin in the spring. Senior archaeologist Danny Schmidt believes this well may be similar in several ways to the one found inside the boundaries of the fort. Though the latter was an open-air well – as opposed to being indoors and in a cellar – both appear to be square in shape and similarly lined to prevent mud leaking into the water supply. Another ongoing investigation at the site of the cellar involves the use of a mobile x-ray florescence analyzer, which Bruker Elemental and Keifer Analytical Incorporated are loaning to the researchers for free. he analyzer is being used to take readings from the different levels of soil that form a wall around the cellar. It sends x-rays into the face of the excavation, and the presence of different elements sends back different luminescence “fingerprints,” according to Dave Kiefer, owner of Kiefer Analytical Inc., and Virginia representative for Bruker Elemental. This technology is commonly used on artifacts to determine more about their make-up without having to break off pieces for more invasive analysis. It is used somewhat less frequently on soil readings, but it is still a valuable tool for confirming some of the previous conclusions archaeologists have drawn as they have studied the soil layers. 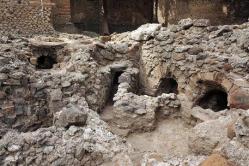 Pompei -  New photography and laser scan technologies are being employed to help with the latest excavations at the ancient city of Pompeii which are focused on the Republican Baths, the fifth and possibly oldest thermal bath structure identified in the archaeological site. In the first century AD, around the time of the Vesuvius eruption which buried the city, the building that held these ancient baths fell into disuse and was incorporated into private residences, such as the House of Lime and the House of the Red Walls. In 1950, the archaeologist Amedeo Maiuri documented its layout, but then no further efforts were made to pursue excavation of the site, which had been entirely covered by earth and vegetation.  Thanks to a new project by the University of Berlin, in collaboration with Oxford University and supported by Pompeii authorities, a two-phase study of the site is now underway. The first phase, carried out in March, involved a general cleaning of the area and an architectural survey. The second phase, a three-week period of excavation which ended in recent days, aimed to investigate how the architecture and technologies used in thermal baths had evolved over time. The Republican Baths, which are documented among the oldest of their kind in Pompeii, were an experimental construction preceding the nearby Stabian baths which represent a perfect model of the traditional spa complex.Confirmation that the Republican baths are in fact an older structure could be found in the presence of ventilated underground cavities that created a room for hot air to heat the thermal baths, consisting of a series of parallel channels, instead of the traditional system of columns of bricks that were more commonly used in Roman baths. Investigations were focused on the sauna and the furnace within the baths, which are among the earliest examples from the transitional phase from the Greek to the Roman model. The aim is to specify their chronological development and operations. Aside from the excavation work, a new map of the area has been created as well as a survey of the site using photographic and laser scan technology. 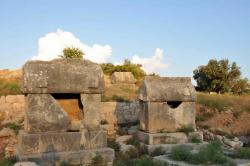 Patara - In Kaş district of Mediterranean province of Antalya, excavation works of this year in ancient site of Patara has been recently concluded. Ancient Site of Patara, known as the capital of ancient Lycian Union, has been under excavation works carried out by Ministry of Culture and Tourism and Akdeniz University Archaeology Department. A team led by Professor Şevket Aktaş has conducted works for 2,5 months this year, within excavation having been endured in the last 27 years. This year’s works have mostly focused on Acropolis and Basilica. While works unearthed significant details regarding the architecture of Helenistic era in Tepecik Acropolis, Basilica works revealed southern nave and the workshops belonging to the late era. Also, a trifoliate planed door providing access to the church was brought to light. Excavation works included classification and take of inventory of the artefacts. Accordingly protection works were resumed in ancient watercourse and water reservoirs. 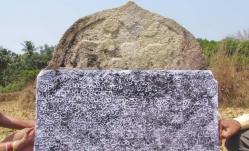 Kollur - An inscription of Vijayanagara King Bukkaraya I has been discovered near Kollur in Udupi district. This is said to be the earliest inscription of Bukkaraya found in Udupi till date. The 24 line epigraph written in Kannada script and language was found at Santegadde of Ellur village near Kollur. The inscription records a donation made for ‘Rudra Pooja,’ of Kotiswara Deva and dates back to Saka Era 1275 corresponding to 1353 AD. "The inscription refers to Veera Bukkanna Odiya (Bukkaraya I of Sangama Dynasty) with usual epithets like ‘ariraya vibhada’ and ‘bhasege tappada rayara ganda’. This is probably the earliest inscription of Vijayanagara King Bukkaraya found in Udupi district till date. It is also the most ancient Vijayanagara record discovered in Kollur region till date,” MSRS College Department of History and Archeology head Prof T Murugeshi told Deccan Chronicle. “There are several inscriptions of Bukkaraya in the district. But this is the earliest one found in Udupi district till now,” he asserted. Murugeshi also throws light on some of the words and names used in the inscription that would help in constructing rehistory of the region. “The inscription refers to Tamma Hegade of Edava Kolli. The Edava Kolli mentioned here could probably be the archaic name for Kollur. The inscription refers to one ‘Maleya Danayaka,’ as Pradhani or Prime Minister. History knows him as the governor of Barakuru. But this inscription mentions him as Prime Minister,” he notes. Two new subordinate rulers or ‘Mandalikas’ of Vijayanagara Kings- Tamma Hegade of Maramundi and Edava Kolli too are mentioned in the inscription.