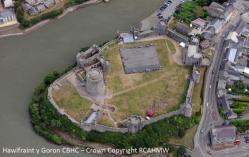 Pembroke Castle - The geophysical survey will further advance the understanding of one of Wales’s and the UK’s most iconic castles and birth place of Henry Tudor, who the town council hopes to permanently commemorate with a planned statue in the town. Best known for its massive round keep built by William Marshal, the greatest knight of his age, little else is known about what exactly was in the castle’s interior. Even the location of the possible chamber block where Henry VII was born is unknown because of post-medieval destruction. Tantalising glimpses of what lies beneath the surface were revealed in aerial photographs in 2013, with parch marks revealing the outline of a number of possible buildings. Dyfed Archaeology Trust with the guidance of Mr Ludlow will use the latest geophysical techniques including ground penetrating radar to try and reveal some of the secrets. Not only could the research reveal the possible chamber block where Henry VII was born, but also what was likely to be extensive high status buildings befitting the great medieval baron and protector of Henry III in his minority, William Marshal, who built extensively there in the early 13th Century. In 1456, Henry VII was born at the castle and he spent most of his childhood there. The castle also played a prominent role in the Civil Wars 1642-9 and was besieged by Oliver Cromwell.

Vallée des Rois - On April 2, a new series of radar scans will be performed on King Tutankhamun's tomb to search for hidden chambers that may contain an undiscovered royal burial, Egypt's antiquities ministry has announced. The announcement comes after stories were published in numerous media outlets last week claiming that Egypt's tourism minister, Hisham Zazou, had told the Spanish news outlet ABC that the chambers had been proven to exist and contain numerous treasures.

CHINE - Nanzuo -  A villager in northwest China's Shaanxi Province unearthed 459 kilograms of ancient coins when he was building a house, said local sources on Tuesday. The villager, surnamed Zhang from Nanzuo Village of Xingping City, was leveling the land last Saturday with a spade when he found a hole half a meter deep. Three kinds of copper coins, some rectangular and others round, were stored inside. All the coins had a hole at the center. Xingping police were called to the site and took the coins. Feng Pengru, a police officer with the cultural relics inspection detachment, told Xinhua that the coins were from the Xin Dynasty (9 AD-23 AD). Wang Mang, an official from the Han Dynasty (202 BC-220 AD), seized the throne to found the Xin Dynasty following his regency. The capital of Xin was at Xi'an in Shaanxi, then called Chang'an. The Han Dynasty was later reestablished after Wang's death. Wang launched a currency reform during his reign, during which he issued various coins. The bold reform only aggravated the financial crisis.

ROYAUME UNI -  Huntingdon - Two ancient skeletons and other human remains have been found by road workers digging up a road crossing in Huntingdon. The bodies were found lying face down in an apparent pagan ritual by workmen resurfacing an island near the Old Bridge Hotel. The coroner's office has been informed about the discovery of the skeletons which are believed to be hundreds of years old and are close to the town's medieval bridge on what was once a key route.

Vordonisi - An ancient, lost island in Turkey is set to be discovered by underwater archaeologists after being submerged by a giant earthquake over 1,000 years ago. The Byzantine island of Vordonisi was lost under the Mamara Sea but archaeologists have now identified its location thanks to recent seismic activity and ancient maps. The island once housed a Byzantine monastery, built by Patriarch Photius I. The monastery, known as either 'Gordonos' or 'Armeniakon', was constructed during Photius' exile from Constantinople, in 886. The patriarch was banished by Emperor Leo VI, after Photius accused him of conspiracy against his predecessor, Basil I. The island is said to be just 540m2, a tenth of the size of the other Prince Islands on the coast of Istanbul – then Constantinople. A major earthquake in Constantinople caused the island to sink a few metres below sea level in the year 1010. The only remnants of the island are tiny flashes of light occasionally seen on the surface – believed to be the very top of the sunken monastery. However, recent earthquakes have slowly but surely caused the island to rise back up.