- USA – Ohio’s mounds - New research is revealing surprising sophistication in the form and structure of ancient American earthen architecture. Archaeologists Sarah Sherwood of Dickinson College and Tristram Kidder of Washington University reveal the complexity of earthworks from Poverty Point in Louisiana to the Cahokia Mounds in Illinois in their paper "Da Vincis of Dirt," published in the latest Journal of Anthropological Archaeology. They observe that "Mound building required a planned effort that incorporated site preparation, sophisticated understanding of soil properties and considerable engineering skills." The mounds are definitely not just piles of dirt. Sherwood and Kidder argue that ancient American Indian mound builders were highly selective in their choice of dirt and had "a comprehensive knowledge of the structure and availability of local geological materials." At most mound sites, the builders gathered earth from nearby sources. But sometimes there was a need for a specific material that was not readily available, and certain soils had to be quarried from several feet beneath the surface or hundreds of feet from the mound. At Newark's Great Circle, for example, dark brown earth from the uppermost soil layers forms the outer portion of the circle, while bright yellow-brown earth from deep beneath the surface forms the inner portion.Earthworks also might show evidence of thoughtful engineering using a variety of techniques, such as mixing different types of soil together to create a stronger material for mound building and cutting and stacking blocks of sod to help stabilize the steep slope of an embankment. However, they are careful to add that the earthworks are not simply marvels of engineering. They say they are testimonials to the spiritual beliefs of the ancient American Indian societies that constructed them. For example, the different soil colors at the Great Circle likely conveyed important symbolic information. Moreover, Newark's Octagon Earthworks are aligned to the rising and setting of the moon over an 18.6-year cycle, which also suggests a spiritual component to the architecture.

- INDE – Girnar Forest – A noted historian from Delhi University Nayanjot Lahiri, who recently visited the reserve forest, found the remnants of two “stupas” which she believed could be of the Mauryan dynasty. Dr. Lahiri located one of the stupas, locally known as Lakha Medi, near the Bhordevi temple inside the forest.  The historian reckoned that the stupa must have been about 50 feet high. Its core was of solid bricks, similar to the “Sanchi Stupa – I” (Madhya Pradesh) and the “Stupa at Piprahwa” (Uttar Pradesh), believed to be of the Mauryan era.  She had also found many loose bricks around indicating there could have been other stupas in the vicinity. But what was more alarming was that the bricks from the stupas were being taken away by the locals for renovating the temple. The historian located another “stupa,” locally called “Rathakot,” near another temple known as “Jina Baba ki Madi,” beyond Hasnapur dam in the Girnar reserve forest. This stupa was found to be in a much better condition. 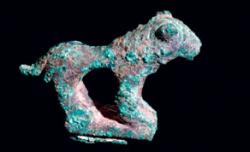 Katara - A bronze lion discovered from Qatar’s Merweb and dated between 8th and 9th century is one of the objects on show at the ‘Heritage without Borders: The third GCC Archaeology Exhibition’ which opens  at Qatar Museums Authority (QMA) Gallery in Katara today. An incomplete glazed, restorative pottery jar with one of the two handles missing and a broken ostiole, also unearthed from Merweb and dating back to the same period, is another exhibit. There is a collection of beads made of precious stones inside a clay jar with missing ostiole. This was recovered from Qatar’s Al Zubara, and dates between 18th and 19th centuries. The other objects from Qatar include a pottery jar glazed with yellow and green colours (Merweb, between 8th and 9th century), two bases of a glassed pottery lamp (Al Zubara, 9th century), and a small pottery jar (Al Zubara, 19th century). The key exhibits from Bahrain include a spouted clay vessel dated between 10th to 7th century BC, and a pair of gold earrings (dated between the end of 2nd century and 1st century BC), both unearthed from Al Magsha historic site. Some of the other objects from Bahrain include, a burial stone statue (from Al Shakhura site, 1st century BC to 1st century AD), and a glazed pottery vessel (from Bar Bar site, from 9th to 10th century AD).

- USA – Iowa City - Thousands of years before modern birdwatchers and picnickers discovered it, people had been attracted to the area now known as Hickory Hill Park, it seems. A team of University of Iowa anthropologists and students hopes to find more evidence of those early residents later this spring, when they will scour the park for artifacts left behind by prehistoric American Indians. Exactly where to dig, however, remains in question. Musgrove is said to have found the pottery pieces along Ralston Creek behind Oakland cemetery in what is now the western portion of the 185-acre park, which was established in 1967. The ceramics have been dated to the Woodland Period — 500 B.C. to A.D. 1000. This year’s field school also will examine and prepare for curration a collection from previous excavations of the “Pest House” remains at Hickory Hill. The former quarantine facility housed smallpox victims until the 1920s.Leigh Ann Randak, Johnson County Historical Society curator, said in earlier decades of farming in the area, it wasn’t uncommon for a landowner to stumble across ancient artifacts in their fields. At her museum, for instance, is a collection of prehistoric tools from a local farm that date to the Paleo-Indian Period, or 13,000 B.C. to 7,900 B.C.