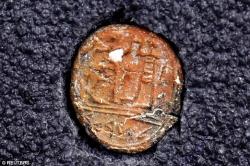 Jerusalem - Archaeologists unveiled on Monday a 2,700-year-old clay seal impression which they said belonged to a biblical governor of Jerusalem. The artifact, inscribed in an ancient Hebrew script as “belonging to the governor of the city”, was likely attached to a shipment or sent as a souvenir on behalf of the governor, the most prominent local position held in Jerusalem at the time, the Israel Antiquities Authority said. The impression, the size of a small coin, depicts two standing men, facing each other in a mirror-like manner and wearing striped garments reaching down to their knees. It was unearthed near the plaza of Judaism’s Western Wall in the Old City of Jerusalem. “It supports the Biblical rendering of the existence of a governor of the city in Jerusalem 2,700 years ago,” an Antiquities Authority statement quoted excavator Shlomit Weksler-Bdolah as saying. Governors of Jerusalem, appointed by the king, are mentioned twice in the Bible, in 2 Kings, which refers to Joshua holding the position, and in 2 Chronicles, which mentions Masseiah in the post during the reign of Josiah.

Korlagunta - Under the scheme ‘Preserve Heritage for Posterity’, launched by the Cultural Centre of Vijayawada and Amaravati (CCVA), its CEO and archaeologist Dr E Sivanagi Reddy discovered a group of historical stone sculptures  during a  survey. Basing on the information received from the villages of Korlagunta in Agiripalli mandal, Krishna district, Dr Reddy examined the sculptures, Mahishasura Mardhini, Chandi, Chamundi, Nandi, Dwarapalika dated back to Vengi Chalukyan period (10th century AD). The sculptures bear a lot of historical significance in terms of art and iconography as the Goddess Durga is depicted standing on the head of buffalo demon.

CHINE – Ou - The Tang Dynasty (618-907) Ou kiln site, excavated by a joint team from the Zhejiang Provincial Institute of Cultural Relics and Archaeology and the Wenzhou City Institute of Cultural Heritage Preservation, has been listed by authorities as an important archaeological discovery of Zhejiang Province on Monday. Ou wares, the name for the ceramics made at the kiln, are a traditional type of ancient celadon with brown decorations. The use of a thin and light layer of glaze is one of the defining characteristics of this type of ware. "Ou ware has a specific beauty. The dark patterns on the light glaze have a certain visual impact," Zheng Jianming, the leader of the archaeological team, told the Qianjiang Evening News. The kiln and numerous Ou wares were unearthed in 2005 in Yongjia county, East China's Zhejiang Province.  Written records from the time period were also discovered at the kiln, which helped date the wares found to the year 857. Other evidence shows that the Ou kiln was responsible for the production of ceramics for the emperors of the Tang Dynasty.

INDE - Purana Quila - The Archaeological survey of India (ASI) carried out its fourth consecutive excavation in Purana Quila.  The fourth excavation is progressing well in the ramparts of the site. Earlier, ASI had carried out three excavations at purana qila in 1954-55,1969 to 1973. Some precious coins and antiquities had discovered during the excavations,” ASI officer said. Explaining about findings, the officials said that Painted grey ware, dating 1500 BC, and various objects and pottery signifying continuous habitation from Maurya to  Shunga, Kushana, Gupta, Rajput, Sultanates and Mughal periods were the major findings from the three excavations.” said, “A ring well of 4.4 meters below the earth was also discovered in the last excavation, he added. The engineer also said that since quila is one of the oldest there is still unrevealed tales behind it. Its present form was built by Sher Shah Suri, the founder of the Sur Empire. Sher Shah raised the citadel of Purana Quila with an extensive city-area sprawling around it. According to historians, it is believed that the Purana Quila was still incomplete at Sher Shah's death in 1545, and was perhaps completed by his Islam Shah although it is not certain which parts were built by whom.

Jakkur - Four months into its research, a team of historians, archaeologists and epigraphists, which is on the job of uncovering inscriptions that define the rich history of Bengaluru, has found two inscriptions dating back to the Hoysala and Ganga-Rashtrakuta dynasties in the city.  One of the researchers, Professor KR Narasimhan, reveals the Hoysala era inscription found in a garden of a private property in Jakkur talks about the grant of Jakkur village as a gift to the “nadasenabhova” or village administrator, Alala. “This Hoysala period inscription dates back to 1342 AD . The 10th  century Ganga-Rashtrakuta inscription found in the same garden of a private property at Jakkur is still being studied as it has not been mentioned in any of  the books on epigraphy. It talks about a war without going into the details of it and mentions a ruler,  Balavapatiraya, the professor discloses.  Mr K Dhanapal, who is studying the inscriptions, reveals that the researchers have also found a part of a temple in Jakkur, which needs to be excavated and studied. “Besides a section of a temple, we have found a sculpture at Jakkur that talks about the three stages of life.  We will do an in-depth study of both soon,” he adds.