Leśno - 28 objects from the Late Bronze Age have been discovered by a farmer during field work near Chojnice (Pomerania). The artefacts found their way to the museum. The farmer - discoverer can count on a reward. The discovery was announced on December 16 by the spokesman for the Pomeranian Conservator Office, Marcin Tymiński. He explained that the treasure consists of three axes with sleeves and handles, a chisel, spearhead, fragments of a spiral brooch and bracelet, as well as numerous items that were parts of a horse harness, including six ornamental plates, bells and other items that once ornamented the part of the harness called the bridle. All the objects have been found in the village of Charzykowy, and come from the late Bronze Age - approx. 900-700 BC. Barbara Zagórska, director of the Museum of History and Ethnography in Chojnice, to which the conserver transferred the treasure, told PAP that such objects are characteristic of the Lusatian culture. "According to the archaeologists who saw these objects, finding this type of objects in the southern tip of Pomerania is very rare. Such items are more commonly found in Lubusz and Szczecin Land. They will be truly unique for our collection" - Zagórska told PAP. She added that in the vicinity of Chojnice more frequent were finds from a slightly later period than the Bronze Age, including the Roman era - especially from the 2nd century AD. "We have a very interesting collection of objects from this period, including unusual Roman vessels and objects from a Roman princess tomb: beads, fibulas and other ornaments, even a dress fragment; those items were found in Leśno near Chojnice" - said Zagórska.

Mian Khan  - Abdul Wali Khan University (AWKU) in Mardan handed over ongoing excavation work at Mian Khan village near Katlang to the provincial archaeology department on Wednesday.The university launched exploratory work on November 17, 2014 after acquiring a licence from the department. “And the university’s team recovered a number of relics dating back to 190 BCE,” said Abdur Rahman who is the curator of the university museum.  When the project started last year, it was supervised by Dr Ihsan Ali, the university’s vice chancellor who is also a renowned archaeologist. The aim of the project was to document and create an archaeological profile of Mian Khan. “The relics found are artifacts and have unprecedented importance in documenting human life,” said Ali. “Archaeologists from both [university and government] departments will proceed further to create a perfect archaeological profile of the area.” Archaeologists recently made invaluable discoveries from the Kushan period which shows Mian Khan “was established 2000 years ago, most likely by Buddhists.” In addition to pottery, beads, miscellaneous iron objects, large storage jars, humped bull and female figurines and a number of copper coins were found there. “We can safely assume—with honour—that we are the true heirs of the great ancient civilization.” 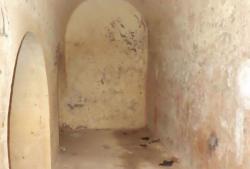 Karnataka - The Tipu Sultan’s armoury near the Srirangapatna railway station is in a bad state. The monument, which is under the protection of the Department of Archaeology, has been losing its charm owing to poor maintenance and neglect. The 18th Century monument has been vandalised by graffiti and has become a den for anti-social elements. The armoury is littered with discarded liquor bottles, cigarette butts and condom packets, and a constant stench hangs heavy in the air.