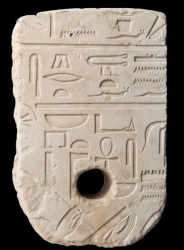 Atlit - What Bahalul, from the village of Ein Hod, had stumbled upon underwater turned out to be a 3,400-year-old Egyptian stone anchor, and a highly unusual one at that. The anchor bore beautiful decorations, featuring the image of an ancient goddess and hieroglyphic writing as well. Experts from the Israel Antiquities Authority to examine his find, which was made just off Atlit, a town near Haifa. “This was a known site from which other finds have emerged, but we were not digging there at the time,” says Jacob Sharvit, head of the IAA’s maritime archaeology unit. Its function is quite mundane and easily identifiable: it was a typical anchor used by ships during the Bronze Age, which ended some 3,200 years ago, says Shirly Ben-Dor Evian, curator of Egyptian archaeology at the museum. These anchors were shaped like a trapezoid with rounded corners, with a hole drilled near the top end to secure a rope. Similar anchors from the period have previously emerged on the coasts of the Levant, including at Atlit itself. But what is unique about this anchor is the amount and quality of the decoration, the curator says. The anchor likely originated in a larger decorative relief located in a temple or royal precinct somewhere in Egypt. The chisel marks that separated it from the rest of the original limestone block, cutting the inscription and shaping it into an anchor, are still clearly visible today. The most telling part of the decoration is the image at the bottom showing a woman writing on a tablet. The symbol above her head identifies her as the goddess Seshat, the ancient Egyptian deity of writing, Ben-Dor Evian explains. The identification of the goddess is also strengthened by the hieroglyphs that accompany her image and proclaim Seshat’s traditional divine attribute: “Mistress of the house of books.” Because it is incomplete, the rest of the inscription is difficult to decipher, but Ben-Dor Evian thinks it may have something to do with the recording of war loot.,Based on the style of the hieroglyphics, it was carved around the 15th century B.C.E, that is more than 3,400 years ago, Ben-Dor Evian says. This would have been during the 18th Dynasty, the pharaohs who founded the New Kingdom and led to ancient Egypt’s maximum expansion. So the Seshat inscription could have adorned one of the many royal reliefs that were set in temples across Egypt, she says. Which temple that might be is still being investigated. All we can say for now is that at some point that shrine was renovated, abandoned or destroyed and the relief was deemed obsolete, allowing for the reuse of the raw material. This must have still happened in the Late Bronze Age, that is between the 15th and 12th centuries B.C.E., because anchors in later periods were shaped differently, Ben-Dor Evian says. So it is possible that not a lot of time passed between the carving of the relief and its repurposing.

INDE - Lalthane - Palghar Forest Department, while excavating a barren land for a rainwater conservation project at Lalthane village in Saphale, Palghar district, found five bronze sculptures, on Thursday. Two grinding stones were also found from the same spot on Saturday. The findings have attracted hordes of locals who visited the spot; some even started to worship the idols. The forest department, however, stepped in and controlled the crowd. The bronze idols measure eight inches each in height and the two grinding stones weigh around 35 kg each, she said. “We will be sending the idols and stones to the Archaeological Survey of India (ASI),” she said.

CHINE - Chongqing - Archeologists in southwest China's Chongqing Municipality have unearthed more than 900 pieces of cultural relics in a local stone Buddhist temple. According to the Chongqing municipal institute of cultural heritage, archeologists had completed the excavation of an area of around 4,600 square meters in a stone Buddhist temple of Jiangjin District in the city. The excavation, lasting from 2016 to 2019, found over 50 sites of buildings, tombs, rock carvings and rock inscriptions from the Tang Dynasty (618 A.D.-907 A.D.) to the Qing Dynasty (1644 A.D.-1911 A.D.), according to Niu Yingbin, an expert with the institute."The discoveries are of great scientific, historical and artistic value, and they provide new materials for the study of the local history and Buddhist culture in ancient China," Niu said. 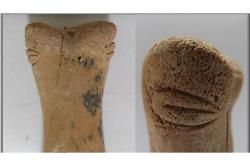 Çatalhöyük - A Polish researcher has discovered a human-like figurine in one of the world’s oldest cities, Çatalhöyük in Turkey. The bone object, around 8,000 years old, offers further insights into that ancient world. Now Kamilla Pawłowska, a professor at the Department of Palaeontology and Stratigraphy at Adam Mickiewicz University in Poznań, has discovered a small bone figurine in Çatalhöyük that she is certain represents a human. “This is undoubtedly an important find with a very simplified, but unambiguous representation of human features in the form of eyes,” said Pawłowska, whose areas of expertise include zoo-archaeology, the branch of archaeology that studies animal remains related to ancient people. Just 6 centimetres high, the figurine is made from a bone from a donkey’s hoof, with cuts that look like eyes. While ancient bone figures with human features have been found in the region before, most of them come from later, around 4300-3300 BC, she explains. Pawłowska has presented her findings in an article entitled “Conceptualization of the Neolithic world in incised equid phalanges: anthropomorphic figurine from Çatalhöyük (GDN Area)” written with Marek Z. Barański of the Academy of Fine Arts in Gdańsk, which was published in January in the journal Archeological and Anthropolical Sciences. “We argue that the choice of bone as a raw material for the artifact (the first bone figurine from Çatalhöyük) is related to its anatomy and to availability,” they write. They also show that the figurine and others found at Çatalhöyük were associated with food storage rooms, highlighting how they differed from the known practices of the Near East.

Bhattu - Archaeologists have found a 2,000-year-old “very potential site” of Kushan era in Fatehabad district where a “good structure of bricks” has been found on a mound spread in almost ten acres of the land. The Haryana government has decided to acquire the entire piece of the land situated at Bhattu village for excavation to know chronology of the civilisation. The site is located near Kunal village, which is billed as biggest archaeological site in Haryana. “The surface of the site indicates that it’s atleast 2,000 year old. There is big structure of bricks. The stone sculptures have also been found from the site,” says an archaeologist. A villager, Ajay Kumar, who is an engineer by profession, told The Indian Express that during past few years many items including silver coins, broken sword and metal items have been found from the spot. “We believe that there was a town spread in 3-km area which was known as Karan Kott. Bones have been found in the area suggesting that it was destroyed during a war which probably took place hundreds of years back. The current village Bhattu came into existence few decades back, atleast 2 km away from the site of Karan Kott,” he said adding he started informing the government officials about the importance of the site two years back.