Sherford  - An ancient settlement dating back more than 3,000 years has been unearthed on the edge of Plymouth. Experts say the excavation is one of the "largest investigations" within the area due to the sheer scale of the site. Andy Mayes, who is leading the archaeology project, said the discovery is "very exciting" for those wanting to find out more about how humans survived during the Iron Age. "What's fantastic is we're looking at an unusually large area showing a whole pre-historic landscape," said Andy, who is based in Bristol. "There hasn't been a great deal of disturbance on the site previously, and it's in pretty good condition under the surface, so it's a question of targeting those areas of significance. "A development like this gives archaeologists a very detailed impression of pre-historic landscapes." Archaeological investigations have been taking place across the first phase of the site over the last year and a site-wide geophysical survey has been completed. The full archaeological dig started at Sherford two weeks ago, with recent findings including Iron Age roundhouses, pottery and bone, potentially dating as far back as between 700 BC – AD43 and possibly earlier. "We found three roundhouses which are likely to be Iron Age in date. We can see from geophysics alone that there were communities living and working on the site probably from the Bronze Age. "People that lived and farmed on the site probably would have been part of an open settlement of farms, and each roundhouse probably had extended family living within it. They didn't last very long – probably 20-30 years." "We've also found animal bone and shell, indicating that they would have been eating oysters on site. "Also we would expect to find fragments of human bone, as during this period they would excarnate their dead instead of burying. They would put them on a platform to be exposed to the elements."

USA - Lexington - Archeologists using 21st-century technology are mapping out the exact spots British soldiers and Colonial militiamen were standing as they fired at each other during a pivotal skirmish on the first day of the American Revolution. Parker's Revenge, as the fight is known, occurred on April 19, 1775, after the battles of Lexington and Concord as the redcoats retreated to Boston. Capt. John Parker, commander of the 77-member Lexington militia, had met the 700-strong British column on the green at 5:30 a.m. Eight of his men were killed and 10 wounded. Undaunted, Parker planned his revenge, positioning his remaining men on a rocky hillside on the border of Lexington and Lincoln and awaiting the return of the British early in the afternoon. Using ground-penetrating radar, sophisticated metal detectors and other modern-day technology, archeologists and volunteers, led by Meg Watters, have uncovered several musket balls as well as a cast copper waistcoat button. Some of the musket balls were unfired, indicating where someone stood during the fight, Watters said. Some had been damaged and flattened, indicating they had been fired, and struck a rock or tree, or perhaps even a person, she said. The project is expected to continue into November or December. 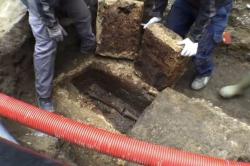 Odense - Archaeologists in Denmark have opened the lid of a sarcophagus to reveal a 1,000-year-old skeleton believed to be that of a 6ft 2in cleric. The archaeologists are hoping to prove whether it could be the remains of 11th century cleric Eilbert, Bishop of Odense. If it is, says The History Blog, it will be the oldest bishop’s grave discovered in northern Europe. The History Blog adds that the skeletal remains once belonged to a male approximately 30-years-old and 187cm (almost 6ft 2in) tall. As a man lifts back the second slab, the lower legs of the skeleton become visible. The archaeologists then begin excavating the top half of the skeleton which is buried in dirt which has leaked through the coffin over time. The man was also buried with a miniature eucharist set, a plate for the host and a chalice for the wine, near his hip, suggesting he held a clerical position within the church. According to The History Blog, the sarcophagus was discovered on September 16 at the foot of an altar in a small timber church of St. Alban’s Priory in Odense, after the archaeologists began a survey of the area ahead of the installation of a light rail project.

CHINE - Gaochang - Archeologists in Xinjiang are racing against time to preserve the ruins of the once majestic city of Gaochang. Last year, the ruins were listed by UNESCO as a World Heritage site, and a crucial part of the ancient Silk Road. Relics recovered at the ruins show that people here have used the same language since the city's founding. In the 14th century, the Gaochang city was burned down and abandoned in a bloody siege during the Mongolian invasion. But throughout its existence, it witnessed the connection of the ancient Silk Road, the spread of new religions and ideas from the west, and most importantly, the founding of Xinjiang's multi-cultural spirit.