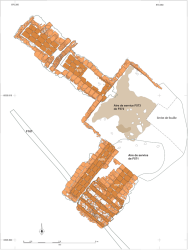 Banias- Archaeologists find structure on top of ancient pagan temple at Banias in northern Israel. A key moment in the life of Christ and the history of the Church took place in the region of Caesarea Philippi, when the Apostle Peter professed his belief that Jesus is the Messiah and the Son of the Living God. In turn, Christ said to Peter, “You are Peter, and upon this rock I will build my church, and the gates of the netherworld shall not prevail against it” (Mt 16:18). The incident took place in an area known as Banias, so named because in earlier times there had been a temple dedicated to the god Pan. Now, archaeologists have uncovered what appears to be a church built on top of that temple and dedicated to the profession of St. Peter. University of Haifa Prof. Adi Erlich, who led the excavation, said the church dates from the 4th-5th century. Its builders adapted the Roman pagan temple to fit the needs of what was then a newly-legalized religion in the Roman Empire. The location of the excavation is unique in that it combines a cliff, a cave, springs and a terrace created in ancient times from the collapse of part of the cliff on which the temple was built. In circa 3rd century [B.C.], worship of the god Pan began near the cave and the spring. The temple was built in circa 20 B.C. It became an important Christian center with its own bishop from [A.D.] 320. Among the Christian finds were little crosses decorating the mosaic flooring of the church. The cross symbol became widespread in Christian iconography after the reign of Constantine, in the mid-4th century. One east-facing niche in the pagan temple that perhaps held a statue of Pan was reinvented as a church apse. Also discovered is a stone that is dressed and dotted with etched crosses, said Erlich, who believes they were graffiti written by 6th-7th century pilgrims. Ancrum - The remains of a lost 650 year old bridge described as “one of the most important structures in medieval Scotland” have been found in the Borders. The Old Ancrum Bridge was built over the River Teviot during the reign of King David II, who ruled from the death of his father Robert the Bruce in 1329 until 1371. It carried the “Via Regia” or King’s Way on the route from Edinburgh to Jedburgh and the Border, and stood for over 400 years before being replaced. Important figures who used the bridge included the 14-year-old James V around the time of the Battle of Melrose in July 1526 and Mary, Queen of Scots following her tour of the Borders in 1566. The bridge was also significant in the Battle of Ancrum Moor when an English force was attacked by a Scottish army in February 1545, during the Rough Wooing, while the Marquis of Montrose used the crossing on his way to defeat at the Battle of Philiphaugh near Selkirk in 1645. Foundations for two piers were identified around 32 feet apart in the riverbed. Radiocarbon dating showed the timbers came from the mid-1300s, meaning they are the oldest scientifically dated remains of a bridge ever found in its original position across one of Scotland’s rivers.

Trøndelag - The grave has been dated to around 1,000 years ago. Archeological finds of Viking graves aren’t necessarily unusual. This particular site, however, gave researchers a surprise. Graves are usually found in groups, but this was the only burial site for miles around. Remains of a square encasement showed that this no ordinary grave. It was a burial chamber. Such chambers were usually reserved for city folk and elite members of Viking society. But Hestnes in Trøndelag was a countryside location since the Viking Age, far from larger settlements. Grave items indicate that the woman was buried about a thousand years ago. Bone and teeth remains have been discovered in the grave. Once they’re analyzed further, they might give key clues as to who the Viking woman was. Green and purple-colored beads are also among found artifacts. So far, researchers have counted over 300. Various brooches and combs were retrieved, too. Given the elaborate nature of the grave and items within, scientists believe the woman was among the more powerful members of the local community. As of now, the mystery lady’s identity remains to be unraveled.

USA - Maryland - After being buried for 300 years, slave quarters at a historic plantation in southern Maryland have been unearthed. The discovery happened earlier this month in Newtowne Neck State Park near an 18th-century manor that was once home to Jesuit missionaries.

Chinnakollappatti - Digging a piece of land for setting up a fish farm led to the discovery of an urn burial site, dating back to the megalithic period, at the Chinnakollappatti village near Sattur. In total, five burial urns and around two dozens of artefacts were found at the sites. These include pots, utensils, plates, lids, a jar with a lid and a stand, and an iron scrapper. These articles must have been filled with things like grains and kept inside the urns as offerings to the dead. The number of articles denotes the rank of the people, who were buried”, he said. These articles must be roughly 2,000 years old belonging to the megalithic period, he added. The mud articles unearthed are partly black and partly red in colour and have a glossy finish. “In order to make such earthenware, only a part of the pot needs to be exposed to the air. This process helps to obtain the two colours. Further, to make it glossy, salt is sprinkled inside the heating stove during the process. Its evaporation makes the pot’s external surface glossy. This is a high-level technique of pottery making. The people, who resided here, had mastered that art,” he explained. About the artefacts discovered at the habitation site, Ravichandran said that they found shell bangles, beads, hopscotch disks (vattachillu), earthenwares, and microliths. “Microliths are an important find as they indicate habitation in the site since the microlithic period (i.e. 6,000 years ago),” he said.

Baishiya Karst Cave - Scientists have discovered Denisovan DNA in Baishiya Karst Cave on China's Qinghai-Tibet Plateau, significantly progressing the study of the Denisovans, according to a study published in the journal Science on Friday. Denisovans, an extinct hominin group that lived around 160,000 years ago, was initially identified from a genome sequence detected in a phalanx fragment found at Denisova Cave in the Altai Mountains of southern Siberia. The new study revealed the presence of Denisovan mitochondrial DNA in late Middle Pleistocene sediments deposited in the cave 100,000 and 60,000 years ago.