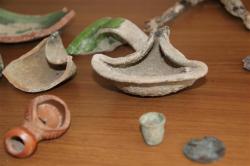 Nevşehir - Excavation and cleaning works on the largest underground city in the world in the Central Anatolian province of Nevşehir have unearthed equipment and life spaces belonging to various civilizations. Excavation work near Nevşehir castle is being conducted on an area of 11 neighborhoods within the 450,000-square-meter ancient underground city by the Nevşehir Culture and Tourism Protection and Development Regions Board. As part of the excavation works, the team has unearthed sepulcher ruins from the late Roman era, along with two “Bezirhane” (seed oil process unit) dating back to early periods of Anatolian civilization. Additionally, fragments from pots and pans used in houses and kitchens, dating back to periods from the late Roman era to the early Byzantine period have been found during the archaeological dig. Pipes and oil-lamps have also been unearthed from the Ottoman and early Republican era. Excavations and cleaning works are continuing in the region.

USA - Jackson Hole - Two or three millennia ago, American Indians used the flats above the wetlands along what's now the northern Moose-Wilson Road as a base camp during seasonal sojourns in Jackson Hole. For thousands of years these natives moved through the valley, tossing aside chunks of obsidian -- scraps from toolmaking -- and leaving behind arrowheads, knife blades and utensils. The circles of stones they used to hold down the edges of their tepees remain in place where they left them, telling part of the story of their passing. Archeologists at Grand Teton National Park are just now finding some of the late Archaic Period relics that were left behind. About 90 percent of the artifacts are obsidian, a prized glasslike volcanic rock. From the scene of an 11-acre site that spans both sides of Moose-Wilson Road known as "48TE498," National Park Service archaeologist Jacquelin St. Clair pointed out a partial stone circle she surmised was a tepee ring. The stones were mostly buried by centuries of accumulated sediment. To the layman, the formation was almost impossible to pick out. It's unclear exactly what tribe roamed the site, the archaeologists said. The Shoshone, Shoshone-Bannock, Crow, Assiniboine, Sioux and 20 other tribes consider Jackson Hole part of their ancestral home. Three distinct archaeological sites containing more than 680 surface artifacts have been identified at the preserve just this year. The first of what would become seven tepee rings were discovered in June. 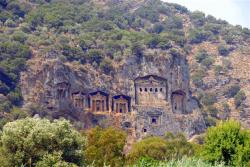 Dalyan - In order to preserve the 2,400 year old ancient stone graves in the Köyceğiz district of the western province of Muğla from those who continue to sit on them while taking pictures despite all warnings, the grave walls will now be covered with wire fences. Many people ignore the rules and try to climb to the graves, which both puts their lives in danger and harms the artifacts. Besides a wire cloth that will hopefully prevent people from risking their lives, viewing platforms situated below the stone graves have been built, on the instructions of Ertuğrul Günay, former Minister of Culture and Tourism, who is concerned with protecting both the visitors and history. 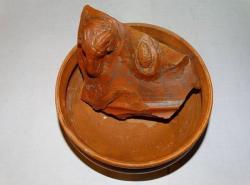 Pavlikeni - The ram head decoration is probably the most interesting of the items discovered in the 2015 summer excavations of the Ancient Roman ceramic factory, after in June 2015 the archaeologists working in Bulgaria’s Pavlikeni found four more Roman pottery kilns in what is believed to have been anunknown Roman town located near the Ancient Roman villa and ceramic factory. The ram head application is found on a fragment of a ceramic vessel which was probably used forreligious purposes, reports Darik Radio citing the archaeologists conducting the digs in Pavlikeni. 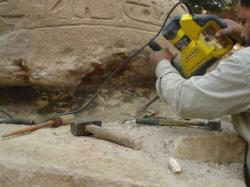 - The discovery of an ancient pillar made for Egyptian King Merneptah has brought about renewed controversy about whether Merneptah was the son of King Ramses the Second, the Pharaoh mentioned in the story of Prophet Moses, or not. Mahmoud Afify, head of the Egyptian Antiquities Sector, said another archeological panel for Merneptah existed in the Egyptian Museum. The panel includes hieroglyphics that mention Israel for the first time in history, he added. Many historians believe that the Pharaoh mentioned in Moses' story was King Ramses II, while others believe it was King Merneptah, not Ramses, said Afify. There is no archeological artifact that proves which pharaoh it was, said former Antiquities Minister Zahi Hawass, adding that the Merneptah pillar does not include any important evidence. 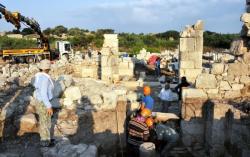 Patara - Excavation works at Patara Ancient Site, the capital of Lycian Union have given start to summer term digs, in Kaş district of Turkey’s southern resort province of Antalya. This year’s team, consisting of 20 scientists, 20 archaeology students and 20 workers, continue their excavations to dure for 2.5 months at two main zones: the Bazilika and Acropol. Excavation in Tepecik part of the site, dating back to the third century B.C., targets to unearth ruins of housings from the Helenistic term, while the Bazilika part’s plan has been charted. The chapel will be excavated in a ‘triconcos plan’ (in the shape of a four leafed clover). The works include restoration and conservation projects, along with excavation on the farms and shops at the first and third cites that have been charted. The team is also in charge of cataloguing the stones in depots and small artefacts. The history of ancient site of Patara dates back to the early Bronze age, and the city had been the capital of Lycian Union until the end of the Byzantium. The first democratic parliament of the world and one of the most important ancient lighthouses in the world are situated in Patara.