Dawson City - It's been a busy summer for construction in Dawson City, Yukon — which means it's also been busy for the territory's archeologists. The latest historical find was unearthed last week, as crews were building a new recreational trail. The workers stumbled upon a stack of 23 old Canadian and American coins, buried about 30 centimetres below ground. They're all from the 19th century, and the oldest is dated 1864. "These are coins that would have been in common circulation during the [Klondike] Gold Rush," said Christian Thomas, special projects archeologist from the Yukon government. 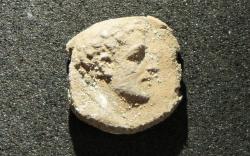 Maresha - An enormous trove of 2,000-year-old clay seal impressions was chanced upon in August during exploration of a newly discovered seven-room cave complex at the ancient city of Maresha, part of the Bet Guvrin-Maresha National Park in central Israel. While attempting to photograph the new subterranean complex, archaeologist Dr. Ian Stern and his photographer son, Asaf Stern, discovered an exciting cache of clay impressions (bullae) littered among millennia-old smashed large jars on a small cave’s floor. An initial survey of 300 of the 1,020 clay sealings indicates they were strung on documents from a large private archive. The quantity and quality of the new, almost unprecedented hoard of sealings is rare on an international scale, said Stern, who directs the excavation at the site. An international expert in the field, Ariel determined that they primarily date from the 2nd century BCE and depicted images of gods, including Athena, Aphrodite, and Apollo, as well as erotic themes, masks, standing figures, and cornucopia. There were a few with Greek letters and numbers indicating dates, but as yet none of the sealings were seen to bear other written inscriptions. A vibrant part of the Helenistic Empire, the city was conquered by Jews and abandoned in 107 BCE, by the Maccabean King John Hyrcanus I. Roman-era pottery discovered at the site give indications that the cave complex was used by Jews weathering the Bar Kochba Revolt of 132-135 CE.

Vyborg - Archaeologists have uncovered a medieval board game in a secret chamber beneath an ancient Russian castle. This chamber, museum officials reported last month, may link the castle—which stands on a tiny island—to the nearby city of Vyborg. According to a Russian social media post from Vladimir Tsoi, director of the Vyborg Museum-Reserve, the game carved into a clay brick is probably a version of nine men’s morris, a strategy game that sees players battle with small pieces known as “men.” Humans have been playing versions of this two-player game around the world for centuries. Similar games have been discovered at ancient sites everywhere from India and China to what was once the Roman Empire. Played on board of intersecting squares, nine men’s morris itself is not unlike checkers. In the game, each player aims to claim the other’s men, much like the pieces in chess. When a player builds a “mill”—a row of three men—on the grid-like board, they are rewarded with an opponent’s game piece. Once a player is down to just two men, they are unable to form mills and their opponent claims victory.

IRAN – Belqais - The Public Relations Office of the Research Institute of Cultural Heritage and Tourism (RICHT) quoted Alireza Najafi as saying that among the most important discoveries in the city, and in a part known as Tappeh Menar, reference can be made to a number of brick and gypsum chambers around the central courtyard and a quadrangle building, 8x8 meters, and a wall thickness of 1.60 meters over which probably a dome had been established. Referring to the discovery of some parts of the structure of the building, including the veranda, the corridor decorated with plaster work and a number of chambers, in archeological exploration in the preceding seasons, Najafi said archeological findings in this section indicate that this structure had been likely destroyed by the Mongols and then turned into an industrial environment (furnaces for forging and pottery making) and the trend continued up to the beginning of Sarbedaran rule. He pointed to a number of rooms with stone foundations and stratiform wall as the most important discoveries inside the citadel which he said were the continuation of the structures which had been discovered previously and most of which had been destroyed during unauthorized excavations. Among the most important remains inside the citadel after the destruction caused by unauthorized excavations and construction in numerous periods, he also referred to the water supply structure including one octagonal and one quadrilateral ponds with a brick waterway inside the central courtyard.

Liar Sang bon - In the fourth season of the field research in the ancient enclosure of Liar Sang bon in Amlash, Gilan Province, 39 graves were discovered. Vali Jahani, head of the exploration team, was quoted by the Public Relations Office of the Research Institute of Cultural Heritage and Tourism (RICHT) as saying that explorations were conducted in four workshops. The archeologist said the discovered graves are in the form of pit, crypt and jar and that characteristics of the objects found in the site shows the time period of the mid-Parthian to the middle Sassanid period. He said the dating has been confirmed on the basis of absolute radiocarbon chronology (C14) tests. Referring to the history of archeological study and exploration in the area, Jahani said the area had been explored in previous years and valuable cultural data from those period had been identified. He further remarked that in a general look, the research works carried out so far on the graves discovered in the site indicate the regional and trans-regional communication of the inhabitants of the area with far and near lands, such as the tribes living in the northern shores of the Caspian Sea like the steppes of southern Russia or modern Armenia, especially simultaneously with the Parthian period.