The ancient Carthaginians were so obsessed with gambling that some may have chosen the races as their final resting place, archaeologists suspect.
Philippe Bohstrom

The hole roughly in the center of the picture is the mouth of the amphora in which the mysterious ancient Carthaginian was buried, in situ. DAI ROM, R. Bockmann
How crazy do you have to be about gambling to have your nearest and dearest inter you at the racetrack? Archaeologists excavating the ancient Roman racing course in the North African city of Carthage have found a burial in the heart of the spectator section in the bleachers around 1,500 years ago.
Whether or not the deceased was a dice-crazed adult remains to be seen, but the choice of venue was certainly striking.

The funerary amphora excavated in its original placing at the racetrack, before removal DAI ROM, St. Cespa
Amphora burials were common in antique North Africa, but for infants, not full-grown dice addicts. The jars were usually too small to contain adult human bodies.
The jar found in Carthage may have been big enough for the remains of an adult: the few bone fragments inside are still being analyzed. At this point, grave robbers had left behind so little that any conclusions beyond the discovery of a large pottery amphora with bones and shells inside, would be speculation.
Also, whether or not they interred the remains in the dead of night, between races, or the track was already defunct, we do not know. It is also possible that the Carthaginian circus stopped functioning as a racetrack in the mid-6th century C.E., and was "repurposed" as a cemetery.
Carthage goes back thousands of years. From an outpost of the Phoenicians who themselves hailed from the Near East, it would become the capital of an empire that vied with Rome itself for power. Ultimately the Romans would vengefully destroy it in the Third Punic War, in 146 B.C.E., then rebuild the city as Roman Carthage, its capital in Africa.
Based on the discovery of dice at the site dating to 1,500 years ago, around the time of the death, even if racing in Roman Carthage had become passe, at least we can say that game was still being played on the site.

Excavating the interior of the amphora before removing it. Some bone fragments and shells remained but the rest had long since been looted. DAI ROM, R. Bockmann
Hexing the race
Only a small part of the circus has been excavated so far; the archaeologists suspect they may find more burials as they explore further. But the discovery of the amphora burial (the only one found so far) nestled in the cavea, the spectator section, in a large jar, could well indicate that the family decided the dear departed should rest where he really liked to be.

The die found at the Carthage circus DAI ROM, D.Gauss
The discovery was made by the German archaeological team who discovered, in 2016,  the unexpectedly advanced hydraulic water system that cooled down horses during chariot races.
As for the putative identity of the remains they did find: “Dice playing and betting were very popular at the races. In fact, it was officially allowed in the circus. People could place bets with bookmakers who had their stalls in the circus itself or nearby," says Dr. Ralf Bockmann, head of the excavation. "Curse tablets made of lead with which people tried to influence the races (to provoke accidents, for example) further illustrate the point."
Such tablets, aspiring to hex the race, were found in the 1980s near the starting gates of the Carthage circus, Bockmann adds.
There is no evidence of racing in Carthage after the 530s C.E., say the archaeologists. But the site evidently remained in some use until then, based on discoveries of pottery and a single die, made of bone, found on the cavea floor.
“The arena was much more than just a racetrack. It was a place to enjoy yourself, meet friends and later, probably after the races had stopped, people probably still living in the area used it to bury their loved ones, maybe out of an affiliation to the building and its role for the community," Bockmann concludes.
Snake eyes makes way
Carthage hadn't reinvented the roulette wheel: Gambling is as old as history itself.  According to ancient Greek mythology, Zeus, Poseidon and Hades cast lots over control of the parts of the universe. Zeus won the Heaves, Poseidon the sea and Hades, who got the short straw, won the Underworld.
In the ancient times, dice was not thought of as a game of chance: it was believed to be controlled by the gods. Dice were cast to choose rulers, make predictions and bet on circumstances. 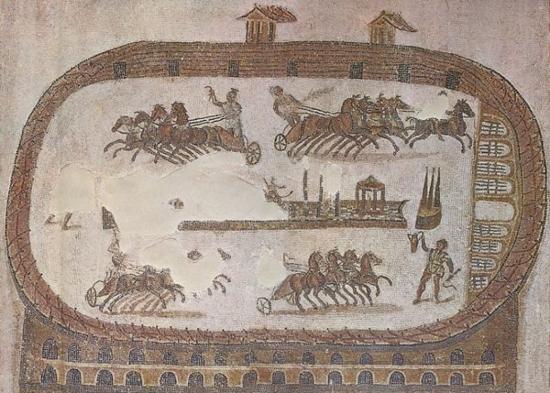 A mosaic showing the Carthage Circus. University of Chicago, Wikimedia Commons
None other than the High Priest of Israel is said to have used two objects called "urim and thummim" embedded in his breastplate to divine God's will. (We have long lost the knowledge of what the urim and thummim actually were. They probably weren't dice, however.)