How apes and humans evolved side by side 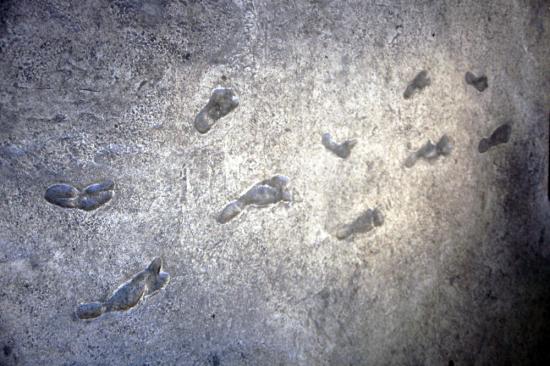 The trackway of hominid footprints at Laetoli in Tanzania is estimated to be 3.6 million years old. -

The trajectory of human evolution has many markers, including footprints left in moist, volcanic ash 3.66 million years ago by three individuals in Laetoli, Tanzania.

Anthropologist Mary Leakey’s team found them in 1978. She later called upon physical anthropologist Russell Tuttle to study them. The footprints are the oldest evidence that early hominids came down from trees and began walking upright.

“If you look at the footprints, they are quite similar to the footprints of modern humans,” said Tuttle, professor of anthropology and a leading expert on early humans. People who live in the Amazon region who have never worn shoes have nearly matching footprints, said Tuttle, author of Apes and Human Evolution, which Harvard University Press published in January.

In the book, Tuttle, one of the nation’s leading paleoanthropologists, incorporates his research with a synthesis of a vast amount of research from other scientists who study primate evolution and behavior. The book explains how apes and humans evolved in relation to one another, and why humans became a bipedal, tool-making, culture-inventing species.

The Laetoli footprint pathway is about 90 feet long and provides a small glimpse to the origins of humans. Tuttle’s research has shown that the hominids were quite short, probably 4 feet to 4 1/2 feet, a height that made them vulnerable to attack from lions and other large predators that would have been roaming the savannas of Africa after the hominid population increased and moved from the forests.

They represent one of several early hominid species that evolved, succeeded and then faded away—leaving behind fossils that are the record of our origins.

Although apes share some characteristics of humans, such as being able to walk upright and being able to communicate with each other, a notable behavioral gulf separates them from people, Tuttle said.

Early humans’ superior brains and their sociability, possibly developed when they made up bands of small creatures needing mutual defense in open areas, set them apart from other primates.

“Humans live in a unique symbolic niche: virtually everything we say, do, create, and make is consciously or unconsciously dependent upon symbols,” Tuttle writes. “Although many other animals probably think about proximate situations, humans have beliefs about phenomena and relationships. Humans have social and moral codes, while apes are probably amoral.”

Symbolically mediated language is an important part of the human story, but scholars are unable to agree on when or how it developed, Tuttle said. It could have emerged, for instance, when people started making increasingly complex tools and needed to communicate about how to use them. It could have begun as gestures that formed a basis for later verbal communication. The muscles and other organs that would have been involved do not survive in the fossils.

But Tuttle writes, “As the language of a hominid community grew more analytic, strong selective pressure for rapid analytic learning by children and sharing truthful information among close relatives resulted in language.” Humans differ from apes in that they can transmit lessons to their children verbally and create a culture for their community.

“There are clear adaptive advantages to individuals in societies that have common values, share resources gathered or produced according to individual skills, protect one another, and can rely on others to assist in child care and tuition instead of each individual having to provide entirely for herself, himself, and dependent progeny. At some point, communication systems became vital for coordinating subsistence activities and resolving disputes within and between groups.”

Despite the distinctions between humans and non-human primates, humans bear a special responsibility toward other primates, Tuttle said. Apes and other nonhuman primates should not be kept in solitary confinement and used for medical tests, for instance.

“It is time to acknowledge the major advances in behavioral and social sciences that demonstrate the remarkable cognitive abilities of apes. Although they might not be moral creatures, our treatment of them will surely reflect badly on our own morality until we change global public policy,” he writes.

Tuttle is Professor of Anthropology, of Evolutionary Biology and of the Biological and Social Sciences in the College and in the Morris Fishbein Center for the History of Science and Medicine. He conducts field and experimental laboratory studies pertaining to the evolution of human and nonhuman primate morphology, locomotion and other behavior.

He will receive the 2014 Darwin Lifetime Achievement Award from the American Association of Physical Anthropologists at its annual meeting in April. In 2003, the American Anthropological Association awarded him the McGraw Hill Award for Excellence in Undergraduate Teaching, and in 2006 he received the University of Chicago’s Quantrell Award for outstanding undergraduate teaching.

He was editor-in-chief of the International Journal of Primatology from 1988 to 2010 and was series editor of the book series Developments in Primatology: Progress and Prospects.