Your Brain Is Smaller Than a Caveman’s. 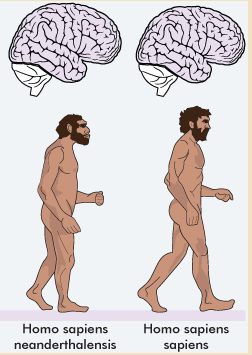 It’s a little-known fact outside paleontology, but over the past 20,000 years—a span that has produced Plato, Shakespeare, Einstein, Mozart, and every piece of human technology not made from a chipped rock—the human brain has gotten smaller. The average male brain 20,000 years ago, during the late Stone Age, was 1,500 cubic centimeters. Now it’s 1,350. In other words, we’ve lost roughly a tennis ball of brain volume. Paleontologists and anthropologists aren’t sure why this has happened, though they offer a variety of explanations. Some point out that our bodies are smaller than those of our Cro-Magnon ancestors, so it stands to reason that our brains might be. Others suggest that our brains got smaller because they’ve grown more efficient.

A new book, The Domesticated Brain by University of Bristol psychologist Bruce Hood, endorses a third explanation: Our brains are smaller because we’ve become more social. The rationale, first advanced by Brian Hare of Duke University, is that the process by which we became better able to live and work together without killing each other also shrunk our brains.

The theory, Hood writes in his book, grew out of Hare’s realization that bonobos, the famously sociable (and sexually promiscuous) chimpanzee species, were smaller than the common chimp. Hare’s own research is with both primates and dogs, and he looked at work by the Russian geneticist Dmitri Belyaev in the 1950s examining the process by which species became domesticated. Belyaev did this by picking a wild animal, the Siberian silver fox, and trying to domesticate it. As it turns out, it took only a dozen generations of choosing the least aggressive foxes from a population and crossbreeding them before he got foxes that shared a lot of traits with domestic dogs—not only were they tamer than wild foxes, they also had floppy ears and a white patch on their foreheads. And they had smaller brains.

What controls both size and aggression? Testosterone. More-docile animals have less testosterone, and testosterone controls brain (and body) size. Human beings, of course, aren’t domesticated in the way dogs are, but the process of civilizing is a sort of self-domestication. As we moved from hunter-gatherer societies to subsistence farmers to middle managers and bureaucrats, aggression became less useful, Hare and Hood suggest, and those members considered overly aggressive were either kicked out of the tribe, sent to the gallows, or simply considered unmarriageable and so prevented from reproducing. Today’s Homo sapiens, in other words, are the bonobos of the human family.

“My suggestion is if you suggest against aggressive behavior, it selects against a whole bunch of traits,” Hood said in an interview. One of those traits is a large brain.

Does this mean we’re stupider than cavemen? The connection between brain size and intelligence is far from straightforward. Plus, it seems that the long shrinkage has turned around in the past few hundred years—perhaps because improving nutrition has allowed our bodies to allocate more resources to our energy-greedy brains. More fundamentally, the self-domestication hypothesis is diametrically opposed to another one, most prominently advanced by the Oxford psychologist Robin Dunbar, which argues that primate and human intelligence arose to deal with the demands of social life. This theory finds a direct relationship between the size of group that a primate lives in and the size of its brain.

But Hare has done work with dogs and wolves showing that they do solve problems differently: Wolves, which have bigger brains, rely on their native smarts, while dogs, wolves’ domesticated cousins, are quicker to give up and turn to their human handlers for help. The dog strategy may or may not be related to its smaller brain, and it’s not likely to be of much use in the wild. But dogs, like humans, don’t live in the wild anymore. Being able to ask for help might be a luxury that’s worth giving up some smarts for.