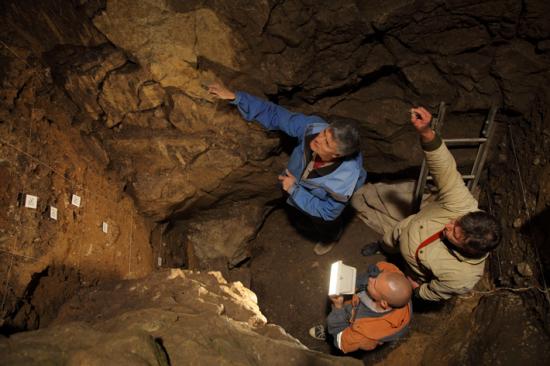 Hominin DNA was detected at four archaeological sites in Europe and Asia, including (above) Russia’s Denisova Cave. Researchers have, in some cases, located DNA at levels where no hominin remains were previously found - IAET SB RAS / Sergei Zelensky

Remains of early humans such as Neanderthals and Denisovans have been discovered at just a limited number of sites in Europe and Asia. This has long frustrated archaeologists, who are confident that many more locations were occupied throughout these regions. This year, however, researchers announced a new way of detecting the hominins’ presence—through genetic traces in cave sediments. A team led by Viviane Slon of the Max Planck Institute for Evolutionary Anthropology analyzed sediments from seven sites in France, Belgium, Spain, Croatia, and Russia, and found Neanderthal DNA at three sites dating to up to 60,000 years ago, and Neanderthal and Denisovan DNA in Russia’s Denisova Cave dating to around 100,000 years ago. In a number of cases, the genetic evidence was located at stratigraphic levels where no hominin remains have been found. “It was really exciting,” says Slon, “to see that even without the bones, we can still find the DNA of these people.”

The technique worked even with sediments that had been collected a number of years ago and stored in labs, Slon notes, “so we’re not only restricted to active excavations.” The researchers hypothesize that the DNA in the sediments comes from body fluids left behind by hominins as well as decomposition of their remains. So far, they have focused on mitochondrial DNA, but hope to be able to find nuclear DNA as well, which would provide additional genetic information about the hominins. 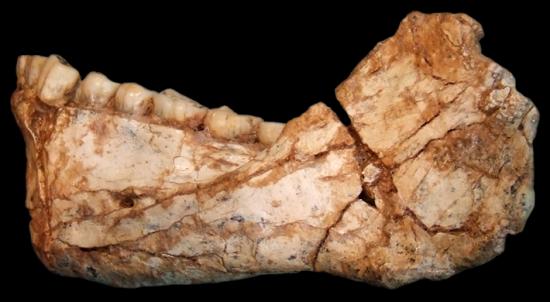 This jawbone has been discovered with other remains of Homo sapiens dating back some 300,000 years. This group displays physical features that are similar to both modern humans and Neanderthals - Jean-Jacques Hublin/MPI EVA Leipzig

Excavations at Jebel Irhoud, near Morocco’s west coast, have uncovered the 300,000-year-old bones of some of the earliest members of the Homo sapiens lineage. Human bones were first discovered at the site in 1961, and their strange combination of archaic and modern features intrigued scientists, who guessed they belonged to Neanderthals and dated to about 40,000 years ago. In 2006, a team led by Jean-Jacques Hublin of the Max Planck Institute for Evolutionary Anthropology reopened excavations at Jebel Irhoud. This year, they revealed their results, providing a glimpse of the earliest members of the ancestral line that led to modern humans.

The Jebel Irhoud hominins apparently lived 350,000 years after Neanderthals and Homo sapiens last shared a common ancestor, long enough for the two lineages to develop some obvious differences. The people of Jebel Irhoud had flat and short faces like modern humans, but their brains were more elongated and their teeth much larger. Their brow ridges were also more prominent than those of humans living today, but not as heavy as those of Neanderthals. 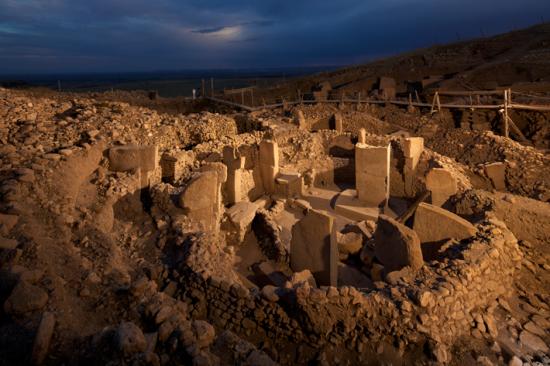 Researchers at the Neolithic ritual center of Göbekli Tepe in Turkey have discovered this fragment of a human skull (below), one of three that were carved and altered after death, and possibly put on public display - National Geographic Magazines/GettyImages

Göbekli Tepe is one of the world’s most significant, yet mysterious, archaeological sites. Between the tenth and eighth millennia B.C., people there erected a series of massive stone circles where groups gathered for religious or social purposes. This year, researchers revealed that microscopic analysis of bone fragments found at the site suggests that human skulls may once have hung there on prominent display. The fragments belong to three partially preserved skulls that were carved and altered after death. This is the first indication of how Göbekli Tepe’s inhabitants may have treated their dead, and archaeologists believe it may provide evidence of an Early Neolithic “skull cult” that exhibited the decapitated heads of either venerated ancestors or dispatched enemies at designated spots.

The discovery further underscores the complex ritual behavior exhibited at Göbekli Tepe. Marks on the three partial skulls indicate that they were de-fleshed, modified, and even painted. Deep incisions were repeatedly carved into the skulls with stone tools to create grooves that ran up the forehead and toward the back of the head. According to researcher Julia Gresky of the German Archaeological Institute, the skulls may have been suspended by a cord that wrapped around the head and passed through a small drill hole at the top. The incised grooves would have prevented the cord from slipping along the smooth surface of the bone as it dangled. “The three modified skulls attest to the special treatment of certain individuals and represent an entirely new category of find,” she says, “one which testifies to the interaction of the living with the dead at this important Early Neolithic ritual center.” 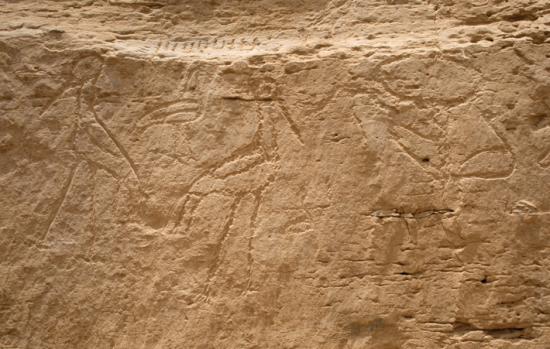 Archaeologists have discovered an oversized inscription that offers a new glimpse into the early development of the Egyptian writing system. A team led by Yale University Egyptologist John Darnell found the hieroglyphs on a cliff face within view of a desert road north of the ancient city of Elkab. Dating to around 3250 B.C., they were carved during Dynasty 0, a period when the Nile Valley was divided into competing kingdoms and scribes were just beginning to master writing. Previously discovered Dynasty 0 inscriptions are less than an inch in height and are largely confined to arcane administrative matters, but the newly discovered inscription is 27 inches tall, and is the earliest known set of large-scale, highly visible hieroglyphs by some 300 years.

The inscription’s symbols—a bull’s head on a pole, followed by two storks and an ibis—are similar to those used in later Egyptian writing to equate a pharaoh’s authority with control over the cosmos. That led Darnell to conclude that the inscription was a royal boundary marker that asserted a king’s dominion over the area. “It was like a signpost,” says Darnell. “Travelers along that road would have known they were entering an area under official authority.” In addition, he believes the discovery suggests that Egyptian writing developed at a quicker pace than previously thought, and was being used to publicly project royal power at a very early date.

The Square Inside Avebury’s Circles 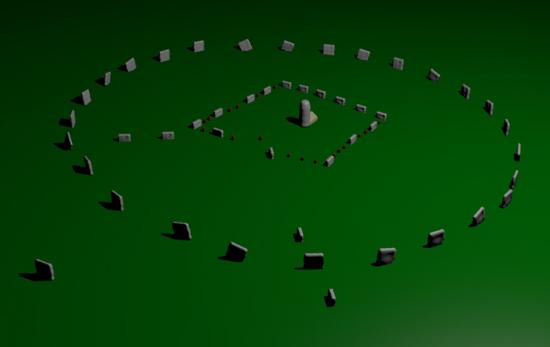 A digital rendering of one of the inner Neolithic stone circles at Avebury, based on a new radar examination of the site, shows a square formation at the center believed to be the outline of a Neolithic building - Courtesy Mark Gillings/University of Leicester

Avebury, the Neolithic monument just north of Stonehenge, may be best known for its outer stone circle, the largest of its kind in Europe, which encompasses the entire site. Archaeologists have now discovered that within one of its inner circles, there was an earlier, square formation. Using radar technology, they have identified evidence of an arrangement of stones that they believe commemorated the footprint of a Neolithic house, a structure built as early as 3500 B.C. While past theories have postulated that Avebury was constructed from the outside in, these findings suggest the site instead sprang from a single building. “One interpretation is to see it like ripples on a pond,” says Mark Gillings of the University of Leicester. “The house decays, its position is marked with a huge standing stone, and its orientation and shape are marked by the square. It may have been 300 years after the house was built that they decided to memorialize it,” he explains. “By that stage it might have even been an ancestral place that had slipped into myth and legend.”