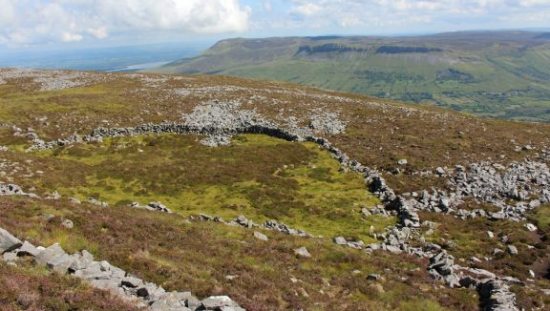 A hilltop tomb recently discovered close to the edge of Tievebaun mountain on the Sligo/Leitrim border may be more than 5,000 years old , according to the archaeologist who found it.

Michael Gibbons said a series of discoveries in this area – including animal enclosures, field systems, and booley settlements – suggests that there are layers of history spanning the Neolithic period, the iron age, the bronze age and the post medieval period on these uplands. 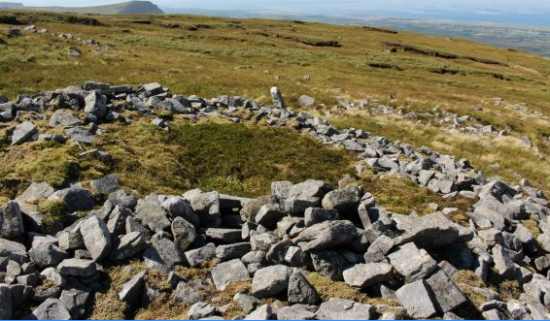 Mr Gibbons, who discovered other tombs in this area a decade ago, said that the hilltop tomb, which was a sacred site up to 3,500 BC, was probably not discovered before now because of its dramatic setting on the edge of the mountain.

“This dramatic spur would have been regarded as being on the edge of the world and at the entrance to another world,” said the archaeologist, who worked on the excavation of the Carrowmore complex of megalithic tombs in Co Sligo some decades ago.

He said the discoveries challenge the widely held view that there were no significant upland settlements in north Leitrim in pre-historic times.

The archaeologist also pointed out that following carbon dating of human remains found last year in a cave on Knocknarea mountain in Co Sligo, by a team led by Dr Marion O’Dowd, it had been established that the Sligo/Leitrim uplands were settled 5500 years ago. 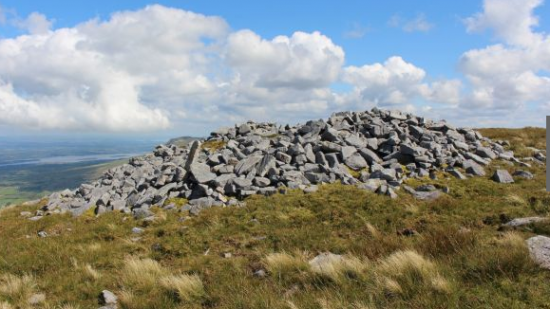 Mr Gibbons discovered the tomb on Tievebaun while exploring an area above the well know landmark the Eagle’s Rock, close to Truskmore mast, some months ago.

“This is a spectacular tomb. It was an incredible achievement to construct it here,” he said.

He said it was extraordinary to think that humans had survived on this plateau which is about 1,000ft above today’s modern settlements. It was also an indicator of climate change. “Obviously it was a good deal warmer and drier in the early Neolithic period,” he said.

The archaeologist said a series of important sites on the mountain spanned several thousand years. As well as Bronze Age animal enclosures, there was evidence of late medieval booley settlements used as temporary dwellings when people drove their cattle up the mountain to graze during the summer months.

Mr Gibbons said there were a series of hilltop tombs across the north west, including Queen Maeve’s grave on Knocknarea.

“This one is a Neolithic tomb probably built 5,500 years ago as a communal burial area. It is a spectacular setting overlooking Donegal Bay, Slieve League, Lough Melvin and Glenade lake.”