The Denisovan : The Other Neanderthal 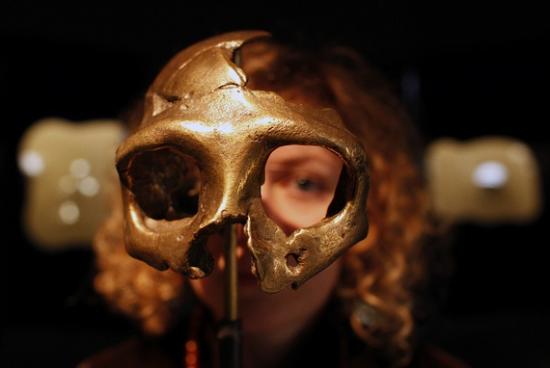 A girl looks through the replica of a neanderthal skull. ( Nikola Solic/Reuters )

We don’t know what the Denisovan looked like. We don’t know how it lived, what tools it used, how tall it was, what it ate, or if it buried its dead.

But from only two teeth and a piece of finger bone smaller than a penny, we’ve been able to extract the rich history of a species that split off from Homo sapiensapproximately 600,000 years ago. We know they’re more closely related to Neanderthals than humans—though still distantly. We know they made their way to Southeast Asian islands, interbreeding with indigenous modern human groups in New Guinea and Australia. We know their interspecies mingling with modern humans in mainland Asia was brief, but enough to impart a few genes. And we know Denisovan genes reveal evidence of interbreeding with Neanderthals and an even more archaic hominin species.

It’s the first human cousin species identified with more than fossil records. Instead, scientists used the DNA it left behind. There’s now a mystery on our hands: Who were the Denisovans, and where did they go?

“We still don’t know what the Denisovans look like morphologically,” says David Reich, a Harvard University geneticist. “We have two teeth right now and a finger bone, all of which have [Denisovan] DNA. But we don’t have anything else that we can firmly connect to the Denisovans.”

The Denisovan gets its name from the Denisova Cave, tucked away in the Altai Mountains in Siberia, near where the borders of Russia, Mongolia, and China intersect. The Denisovan pinky bone was found in 2008. (The teeth were found eight years before that but weren’t initially identified.) Archaeologists from the Institute of Archaeology and Ethnology of Novosibirsk stumbled upon these fragments as they searched for Neanderthal tools. Despite the presence of tools from the mid-Stone Age Mousterian Neanderthal culture, the finger bone found in Denisova showed mitochondrial DNA (mtDNA) different from Neanderthals or humans. Mitochondrial DNA is exclusively derived matrilineally—that is, tracing descent through the mother’s genetic line—with no information about any admixture deriving from males anywhere along the line. Further analysis of the nuclear genome showed Denisovans are more closely tied to Neanderthals, splitting off some 400,000 years ago.

In other words, mtDNA is only part of the story.

Reich had previously worked with Denisovan project lead Svante Pääbo of the Max Planck Institute tracing the DNA of Neanderthals. Pääbo and his team knew there was something different about the original mtDNA extracted, which showed 1 million years separation from Neanderthals and modern humans. Reich found more clues in the nuclear genome.

The genome is extracted from the nucleus of the gene rather than the mitochondria organelles, and shows traits inherited from male ancestors—a process that provides a more complete genetic picture of our distant cousin species. As researchers zeroed in on this genome, a picture began to emerge of a separate human lineage. With that, we had a new hominin cousin species hiding in plain sight in East Asia.

“Denisovans are an example of—in my mind—how mitochondrial DNA can lead you wrong, and only the nuclear genome tells the full story,” Pääbo said. “The mtDNA of the Denisovans diverge before modern human and Neandertal mtDNA [break off] from each other, yet the nuclear genome shows that they share a common ancestor with Neandertals, but far back in time. Perhaps they even got the mtDNA by gene flow from some other hominin in Asia.”

So the mother’s mother’s mother (ad infinitum) of the Denisovan showed a more ancient lineage than the nuclear genome, which revealed a hominin with a more recent branch of evolution with Neanderthals. The Denisovans split off from the lineage of Neanderthals 200,000 years after humans had already had their split from the species.

The team found a DNA match for the mysterious human cousin in the islands of Southeast Asia, thousands of years removed from the Siberian Population. It wasn’t through fossil records, but through the DNA of their human descendants.

Denisovan DNA was compared with modern human populations, matching with the Melanesian people of Papua New Guinea and the Aborigines of Australia. Some—but not all—indigenous populations in the Philippines show evidence of Denisovan ancestry. Melanesians and Aborigines share 5 percent of their DNA with the Denisovan hominin; Filipino indigenous groups like the Mamanwa and the Manobo share as much, if not more. Comparatively, European humans share only between 1 percent and 4 percent of DNA with the Neanderthals. The genetic evidence showed the Siberian Denisovan was distantly related to the Denisovan group that interbred with the island populations of Southeast Asia. The lines between the two Denisovans diverged 280,000 to 400,000 years ago.

“What’s quite clear is that 40,000 years ago, Southeast Asia was already a patchwork of peoples with and without Denisovan ancestry,” Reich said. The limited interbreeding that took place on the main Asian continent still shows up in populations there today as a small piece of the Denisovan hominin puzzle.

What’s perhaps more surprising is that there is a low rate of interbreeding in China, Mongolia, Nepal and other countries on the main continent. If the Denisovans were in the area for long, they certainly didn’t interact with Homo sapiens in quite the same way as they did in Southeast Asia. But the fractions of a percent of shared DNA seen in modern Asian populations have imparted beneficial adaptations to some groups there—even if it’s just from a great-to-an-unknown-power grandfather. And all this adds up to more clues, however small, explaining the migration of the Denisovan.

DNA mixture in mainland Asia isn’t entirely absent. Some groups still have the markers of Denisovans, however small. For native Tibetans, ancient hominin interbreeding—however small a portion of their overall genome—may have impacted their ability to live in climates and altitudes hostile to other groups. Rasmus Nielsen, a faculty member of the Center for Theoretical Evolutionary Genomics, previously worked on tracing how Tibetans can withstand the effects of hypoxia in low-oxygen environments. In 2010, his team published a paper indicating the EPAS1 gene as the culprit behind this beneficial mutation. The gene regulates the body’s reaction to low oxygen environments, allowing Tibetans to produce fewer red blood cells and less hemoglobin.

When comparing Tibetan DNA to other human groups, no one could find where the EPAS1 gene might have arisen. It didn’t show up in other Homo sapiens populations. It would seem that it came from another species entirely. So Nielsen went looking for the other hominin.

“The difference between the DNA sequence in Tibetans and all other human human populations was simply too large,” Nielsen said. “Our models of natural selection and mutation just couldn’t explain that. So we started to look for other explanations, and we compared first to the Neanderthal sequence, and we can show that there’s no match to the Neanderthal sequence.” So on a longshot bet, Nielsen compared the recently uncovered Denisovan genome to the Tibetans. The Denisovan ancestry was fractional, but the EPAS1 was an exact match between the two populations.

Prior to dispersing to the islands, the Denisovans hung around just long enough to give Tibetans the gene they needed to survive the Himalayas.

With scant fossil evidence, it’s hard to know what to look for when it comes to learning more about the Denisovan.

It would take a DNA match in a fossil to positively identify any fossil found as Denisovan. The low temperatures of the Denisova Cave helped preserve much of the DNA in the scant fossil record, but the same can’t be said of a number of human species whose lineage has to be resolved based on physical fossil evidence because DNA is too far decayed to prove useful.

There are a few suspicions on Denisovan fossil matches, however.

“There’s a very enigmatic fossil record in China that contains possible candidates for Denisovans, and that’s sort of a very interesting place to look aside from Southeast Asia,” Reich said, specifically referring to the Dali and Maba Man, two enigmatic fossils found in two different areas of China. Pääbo also sequenced DNA from a 400,000 year old femur bone found in a cave in Spain. While Neanderthals were known to dominate Europe prior to the arrival of humans, mtDNA in the femur was a closer match to Denisovans, complicating the existing picture of migration. In the absence of nuclear DNA, though, it’s hard to determine the extent of a match.

There may also be existing specimens not yet tested. “So you have a large amount of potential candidates from museum collections that you could investigate to see if there’s some match to the Denisovan DNA,” Nielsen said.

Even if the mystery of the Denisovan is solved, there are plenty more unknowns. In the DNA of the Siberian Denisovan there were the markers of a third species. Where there was interbreeding between Neanderthals and Denisovans, there was also gene flow from another unidentified species more ancient than either Neanderthals and Denisovans, meaning a very old species likely lived alongside and at the same time as both.

“The gene flow from Denisovans was from another archaic population that was extremely distantly related to the Denisovan from the Denisova Cave,” Reich said. In other words, whatever the mystery species was, it shared a common ancestor that wasn’t Denisovan. “What becomes clear is that there were at least three highly divergent archaic populations. And who knows, there could have been more in Eurasia at that time.”

Until a fossil is identified, we won’t conclusively know what the Denisovan looks like. But the quest to learn more is starting to generate even more questions. In tracking the Denisovan, scientists have found evidence of other archaic groups, predating humans, Neanderthals and Denisovans.

They’ve found evidence of a species with a wide migration pattern, one that may have brought it—or a distant ancestor—into the European continent. There’s evidence through the Denisovans Aborigine descendants that it may have crossed the Wallace Line, the geographic boundary between placental mammals and primitive forms like monotremes and marsupials on the Australian continent. But did the Denisovans cross that line, or were the Aborigines the first explorers?

What else might our mysterious cousin reveal? That’s something scientists will continue to explore in the coming years, and it will take more than a molar and a pinky. Until then, the Denisovan will remain a ghost, hiding from its human cousins and children, known only by the DNA it left behind.