The tiny inscribed pottery shard unearthed at Lachish dates to 3,500 years ago and is the oldest text from the Southern Levant to use alphabetic writing, rather than pictographic, archaeologists say

Archaeologists digging in the ancient Canaanite settlement of Lachish have unearthed a 3,500 year old pottery shard inscribed with what they believe is the oldest text found in Israel that was written using an alphabetic script. Earlier Canaanite texts are known, but they were written using hieroglyphs or cuneiform characters.

The discovery of the alphabetic writing fills a gap in the early history of a script that apparently was developed by Canaanite migrants in ancient Egypt. From the Levant, the writing system would eventually spread around the world, becoming the most commonly used writing system to this day.

Back in Lachish, the tiny shard is the remnant of a clay pot that had been imported from Cyprus and written on using ink in Canaan. Measuring just 4 by 3.5 centimeters, the fragment contains a handful of characters spread over two lines. It was discovered in 2018 by an Austrian expedition digging at Lachish and was published Thursday in the journal Antiquity.

While experts are still struggling to decipher the short text (more on that below), they are confident it can be dated to around 1450 B.C.E, at the beginning of the Late Bronze Age. This provides researchers with a “missing link” in the history of the alphabet, connecting earlier alphabetic inscriptions found in Egypt and Sinai to later texts unearthed in Canaan, says Felix Hoflmayer, a researcher from the Archaeological Institute of the Austrian Academy of Sciences.

During the subsequent Iron Age, this proto-Canaanite alphabet would develop into the writing systems used by the peoples of the Levant. The ancient Israelites would use it to pen the Hebrew Bible, while the Phoenician version of the script would be spread by merchants across the Mediterranean, to Greece and then Rome – eventually becoming the Latin alphabet that you are reading at this very moment.

Credit: the Fourth Expedition to Lachish

But the origins of the alphabet are still shrouded in mystery. The earliest examples of alphabetic writing were found scribbled on rocks at Wadi el-Hol, in Egypt’s Western desert, and at Serabit el-Khadim, an ancient Egyptian turquoise mining operation in the southern Sinai, Hoflmayer explains. These so-called Proto-Sinaitic texts date to the 19th or 18th centuries B.C.E., and scholars generally believe they were written by Canaanite workers or slaves who were living in Egypt, almost 4,000 years ago. Unschooled in the complex pictograms of Egypt’s writing system, they adopted some hieroglyphs to represent the sounds of their own Semitic language.

For example, the Egyptian hieroglyph for “house” – “bayt” in both Hebrew and ancient Canaanite – was repurposed to represent the phoneme “B”.

One big question for scholars is when and how this early Semitic alphabetic script made its way back from Egypt into Canaan. The earliest securely dated alphabetic inscriptions in the Levant go back, at most, to the 12th or 13th centuries B.C.E. – about half a millennium after their Proto-Sinaitic predecessors.

That’s why the newly discovered text from Lachish is so important. “It closes the gap between the early alphabetic writing in Sinai and later texts in the Southern Levant,” Hoflmayer tells Haaretz.

There are actually a few other Levantine inscriptions, including one found on a dagger unearthed at Lachish, which may be from a slightly earlier time, but experts are divided on the dating of these texts and whether they truly represent alphabetical writing, he says.

In contrast, the Lachish shard was securely placed in the mid 15th century B.C.E. by radiocarbon dating organic materials that were found in the same archaeological layer as the inscription. Unearthed in a large building that was part of Lachish’s Late Bronze Age fortifications, the fragment was once part of a decorated ceramic bowl imported from Cyprus, Hoflmayer and colleagues write in the Antiquity article.

This is not unusual, as during the Bronze Age Lachish was a major town mentioned in ancient Egyptian records. Located midway between Jerusalem and Beer-Sheva, it housed monumental structures and was a hub for imported goods from across the Eastern Mediterranean. Centuries later, in the Iron Age, it would become a key settlement of the ancient Israelite kingdom of Judah, and is mentioned multiple times in the Bible.

Going to back to the inscribed shard, the words scribbled on it are difficult to decipher because the text is very short and incomplete. Also, it is unclear in what direction it should be read, since the convention of writing Semitic languages from right to left was only adopted at a later time, Hoflmayer notes.

According to Haggai Misgav, an epigraphist from the Hebrew University in Jerusalem, the first three letters of the text may spell out the word ebed, meaning “slave” or “servant.”

This doesn’t mean that the word refers to an actual slave, but was more likely part of a name. Personal names at the time often included the word “servant” along with the name of a local god to invoke the protection of that particular deity or symbolize one’s devotion. More recent equivalents of this would be the Hebrew name Obadiah (servant of Yahweh) or the Arabic Abdullah (servant of Allah).

The second line in the inscription is even harder to interpret, but it may spell out the word “nophet” which in Hebrew means “nectar” or “honey.” Whether this means that the inscription was meant to mark the bowl as someone’s honey pot is unclear, but it is the simple existence of this brief alphabetical text at Lachish in the 15th century B.C.E. that has researchers excited.

“Its mere presence leads us to rethink the emergence and the proliferation of the early alphabet in the Near East,” Hoflmayer says.

Because of the dearth of texts from this period, many scholars believed that the Proto-Sinaitic alphabet was introduced to Canaan only in the 14th or 13th centuries B.C.E., at a time when Egypt directly controlled the Levant. But the Lachish shard, which is at least a century older than that, shows that alphabetic script was already present in the Levant well before the Egyptian conquest. It suggests that the spread of this writing system was linked to the ties between Egypt and Canaan, which were particularly strong during the so-called Second Intermediate Period. 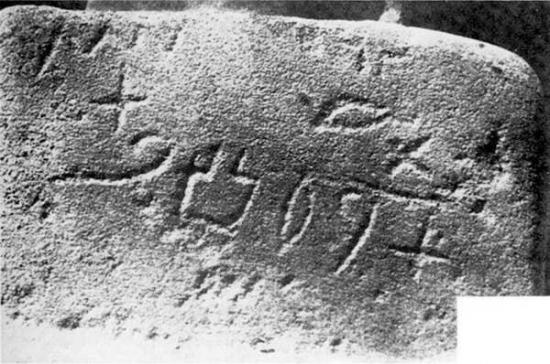 During this time (from the 17th to 16th centuries B.C.E.) northern Egypt was governed by the Hyksos, a dynasty of rulers with Semitic roots. While depicted as invaders by later pharaonic propaganda, most scholars today see evidence that the Hyksos were in fact a local population descended from longtime immigrants from the Levant – perhaps those same Semitic workers or slaves who scribbled the first alphabetic texts in the Egyptian desert.

It is therefore plausible that it was during the Hyksos domination that this simple idea of representing sounds with symbols, first used by Levantine migrants in Egypt, migrated back to the land of Canaan. And from there, it would take over the world.

Oldest etching of the letter samekh,also found in Lachish, dating to about 1200 B.C.E.Credit: Tal Rogovski